I got married at 20, divorced at 22 – Don Jazzy reveals - MyJoyOnline.com 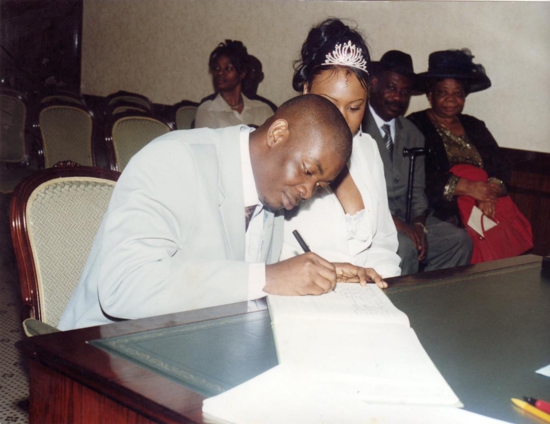 Don Jazzy and his ex-wife at their wedding (Credit: Instagram - @donjazzy)

Popular beatmaker, Don Jazzy, has revealed that he got married 18 years ago, at the age of 20, to an American model and writer, Michelle.

In an Instagram post, he stated that because he was young and solely focused on his music, hence, the marriage failed two years later.

The Mavin Records boss who posted some pictures from the wedding said that although he likes to keep his private life out of the public eye, he wanted to open up on this “big” side of his life after skipping it during an interview.

A post shared by ITS DON JAZZY AGAIN 😎 (@donjazzy)

“For so long, everyone keeps asking me when am I getting married? Well, the truth is almost 18 years ago, I was 20 and I got married to my best friend Michelle and it was beautiful. I loved love and I loved marriage. Michelle is soooo beautiful inside and outside with such a soft heart.”

“But then, me being so young and full of dreams, I went and messed it up cos I was giving all my time to my music. Music became a priority instead of my family. We got divorced when I was 22 and it hurt.”

Don Jazzy said that he still holds so much love for his music and work thus he would not want to marry another person and mess up the relationship again. “So, I’m taking my time.”