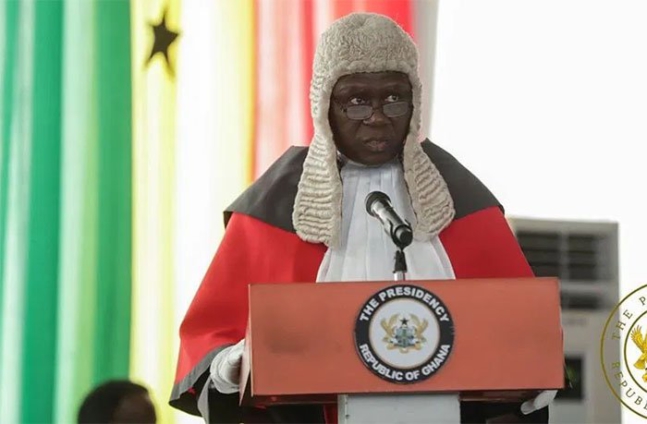 The Chief Justice has turned down a request by South Dayi MP, Rockson-Nelson Dafeamekpor, to release details of a probe into unlawful admissions at the Ghana School of Law.

Kwasi Anin-Yeboah explained that he has not been authorised by the General Legal Council (GLC), a body he chairs, to release the said documents.

“I am unfortunately not authorised by the Council to release the requested documents relating to the ongoing investigation. The constituted committee is yet to report to the Council on any progress to date.”

Admission into the only school running the professional law programme remains a contentious matter as every year, thousands of students fail the entrance examination.

This year, only 790 out of more than 2,000 students who wrote the exam gained admission into the Ghana School of Law.

However, 499 others who insisted they passed, have since been granted admission following weeks of agitation and legal action.

Mr Dafeamekpor, in the letter to the Council, said some students who took the exam last year and should not have been admitted were, nonetheless, admitted.

The MP said he is aware that the outgoing President of the Ghana Bar Association (GBA), Anthony Forson Jnr, chaired the committee tasked to investigate the matter.

The committee is said to have queried and received responses from the Acting Director of the school, the Registrar and the Deputy Registrar.

The MP wanted all these documents made available to him, arguing that Ghana’s constitution and the Right to Information law allow him to access these documents.

He wanted these documents made available to him in seven days.

The Chief Justice says he will table the request to the GLC at its next meeting for consideration.

DISCLAIMER: The Views, Comments, Opinions, Contributions and Statements made by Readers and Contributors on this platform do not necessarily represent the views or policy of Multimedia Group Limited.
Tags:
Chief Justice Kwasi Anin-Yeboah
Ghana School of Law