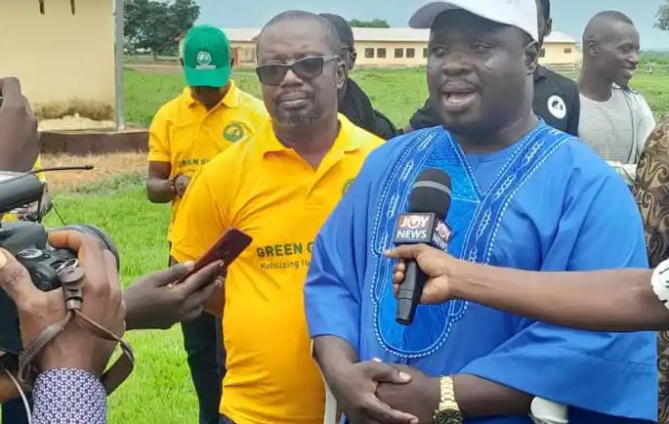 The Oti Regional Minister says he did not order the removal of trees planted by the National Democratic Congress (NDC) to commemorate the June 4th anniversary in the region.

Speaking in Parliament on Tuesday, November 8, Joshua Makubu denied making any such order, despite admitting previously that he directed his party officials to do same.

“Mr Speaker, as the Minister for the Oti Region, I have never asked anybody to uproot any tree seedlings planted by the NDC officials in Nkwanta SHS,” he said.

Earlier in June, this year, the Minister is on record to have ordered the Nkwanta Municipal Chief Executive (MCE), Bright Lenwah, to uproot trees planted by NDC on the Nkwanta SHS campus to mark the June 4 anniversary.

This, according to him, was to prevent an occasion that saw the killing of people to be commemorated on a school premise.

“People are still crying over it. For this reason, it is not an occasion to plant trees that will keep hurting such families as the NDC did.

“We cannot sit down as a country, as a Municipality, as a Region or a School and allow trees to be planted on a compound to signify this day where people lost their lives.”

Mr Makubu challenged the media to quote him verbatim on the matter, and that he would always be ready to defend his stand.

“I want any media house here that has the intention of quoting me to quote me exactly in the words that I have used, and I will defend that everywhere.

“If you want to plant your party trees, get a land, invite us and we’ll come but not on a school belonging to the country,” he added.

But answering a question in Parliament yesterday, the Minister changed the narrative – and this raised eyebrows among the lawmakers.

The Member of Parliament (MP) for Buem, Kofi Adams, in whose name the question stood described the response of the Minister as a falsehood.

“Well, he knows that what he did possibly is wrong so he’s trying to deny the fact that he ordered for the uprooting of seedlings. The people of Oti Region and Nkwanta are watching him live and they would know where the truth lies.”

DISCLAIMER: The Views, Comments, Opinions, Contributions and Statements made by Readers and Contributors on this platform do not necessarily represent the views or policy of Multimedia Group Limited.
Tags:
Joshua Makubu
June 4 uprising
Kofi Adams
NDC
Oti Regional Minister