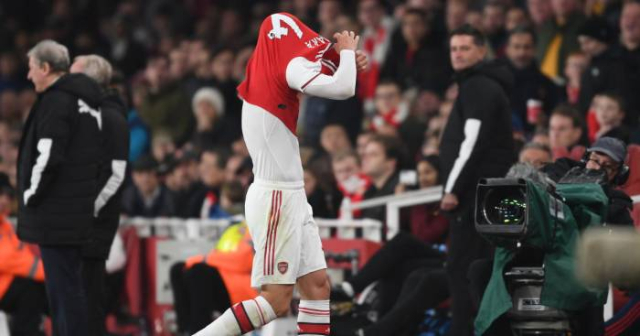 Arsenal captain Granit Xhaka says he “reached boiling point” following repeated threats to his wife and daughter, as he explained his angry confrontation with fans on Sunday.

The Swiss midfielder was booed while he walked off the pitch at Emirates Stadium, prompting him to cup his ear.

In an emotional statement, he said he had been “hurt deeply” by comments on social media and at matches recently.

They included ‘Kill your wife’ and ‘Wish that your daughter gets cancer’.

Breaking his silence for the first time since the incident, Xhaka, 27, said he got “carried away” and reacted “disrespectfully” to fans.

Arsenal manager Unai Emery had called for Xhaka to apologise for his reaction but the player instead said he was sorry if people had thought he was being disrespectful.

“The scenes that took place around my substitution have moved me deeply,” Xhaka said in statement on Instagram on Thursday. “I love this club and always give 100% on and off the pitch.

“My feeling of not being understood by fans, and repeated abusive comments at matches and in social media over the last weeks and months have hurt me deeply.

“People have said things like, ‘We will break your legs’, ‘Kill your wife’ and ‘Wish that your daughter gets cancer’. That has stirred me up and I reached boiling point when I felt the rejection in the stadium on Sunday.

“In this situation, I let myself be carried away and reacted in a way that disrespected the group of fans that support our club, our team and myself with positive energy. That has not been my intention and I’m sorry if that’s what people thought.

“My wish is that we get back to a place of mutual respect, remembering why we fell in love with this game in the first place. Let’s move forward positively together.”

It was not the first time Xhaka had been booed by his own fans this season, with Emery publicly defending the midfielder after a game against Aston Villa last month.

That uneasy relationship with the Gunners fans did not stop Emery appointing Xhaka as club captain in September after the summer departure of Laurent Koscielny.

However, Emery has refused to confirm whether Xhaka will remain captain after Sunday’s incident.

DISCLAIMER: The Views, Comments, Opinions, Contributions and Statements made by Readers and Contributors on this platform do not necessarily represent the views or policy of Multimedia Group Limited.
Tags:
Arsenal
Granit Xhaka