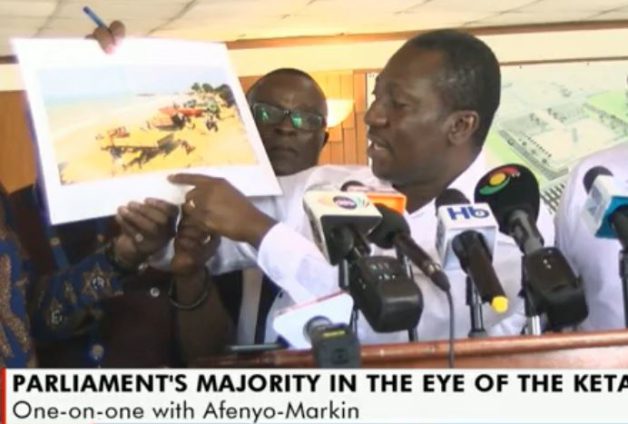 The Deputy Majority Leader in Parliament, Alexander Afenyo-Markin, has apologised for using a photo purportedly of sand winning activities in Keta in the Volta Region, which turned out not to be the case.

He rendered the apology on JoyNews’ PM Express on Monday, November 15.

“I sincerely apologise for relying on this [picture]…I render an unqualified apology. We reasonably relied on this picture in an article, the source has since pulled down, and I apologise, and it was not intended to mislead; if it was so, we wouldn’t have handed over all the documents,” he told Evans Mensah.

This comes after the Deputy Majority Leader, during a press conference on the Keta tidal waves, showed a picture of some heavy-duty trucks purportedly loading sand from the shores of Keta in the Volta Region.

However, the Member of Parliament for the South Dayi constituency, Nelson-Rockson Dafeamekpor, challenged Mr Afenyo-Markin that the picture he portrayed does not have anything to do with Keta, which turns out to be true.

The legislator, reacting to this, said the image was not intended to mislead the public.

He explained that the source he relied on for the picture has pulled the image down hence the apology to the people of Keta and all Ghanaians who had the opportunity to see the picture.

Meanwhile, the Minister for Works and Housing, Francis Asenso-Boakye, has expressed grave worry about the heavy politicisation of tidal waves and its devastating effects on the lives of the country’s coastal dwellers.

The issue, the Minister indicated, is a national problem that should be devoid of every temptation by political watchers, especially politicians, to score cheap political points with such occurrences.

He added that such narratives are not only acts of dishonesty but also a great disservice to the affected people.