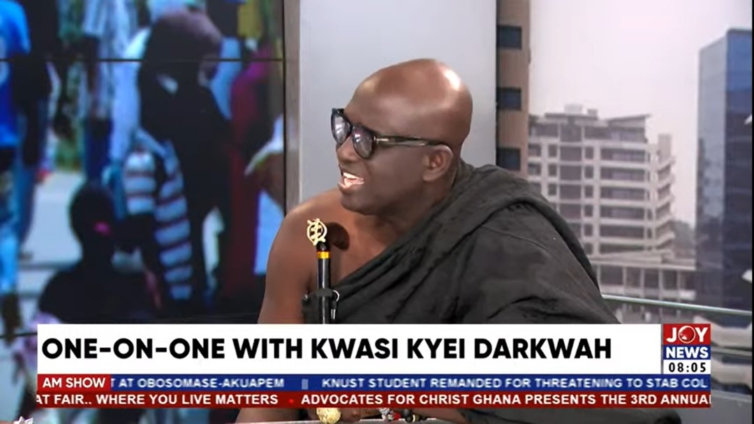 According to him, the widely chorused slogan by the ruling New Patriotic Party is not needed; especially when Ghanaians are currently urging government to deliver on its promises.

In an interview with Benjamin Akakpo on JoyNews’ AM Show on Wednesday, the seasoned broadcaster ridiculed the mantra, and questioned its relevance.

The woman is displeased. She’s thinking of leaving you. It is at that point that you now say, everything you’ve been asking for, I’m now coming to do?”, he quizzed.

In expressing his displeasure with the current regime, he also urged estranged members of the Convention People’s Party (CPP) to come together to present a third force in Ghana’s politics.

This he said, is necessary to break the duopoly of the opposition National Democratic Congress (NDC) and the ruling New Patriotic Party (NPP).

The seasoned broadcaster has been a sensation in the last couple of days, following his outburst against the government.

In an interview on GTV’s Breakfast Show on Wednesday, August 17, he expressed his surprise at government for constantly employing the services of a company co-founded by the Finance Minister – Data Bank Financial Services – as advisors for some of Ghana’s international loan transactions.

His outburst on the show resonated with many Ghanaians who have since asked leaders to avoid occupying a public office that can cause conflict of interest.

But the Ministry of Finance has dismissed the claims that Databank and Black Star Brokerage were handpicked by the Finance Ministry and the Bank of Ghana (BoG) to act as Bond Market Specialists for government bond issuance, hence benefiting from those transactions.

Meanwhile, a section of the populace have also questioned the motive behind his recent heated outburst against government and the current state of affairs in the country.

According to some of his critics, he has been witnessing the rots in the country for years, and thus they do not understand his silence until now.

But reacting to this, he told host, Benjamin Akakpo that he has been compelled to break his silence due to the rate at which things are getting bad in the country.

In his submissions, he added that he is unfazed by the numerous death threats he has received from politicians after speaking “truth” to power.

According to him, he will not allow cowardice to push him to become silent when the nation is being mismanaged.

“I have eaten in places that some of the people in political office are now seeking to dine in. What have I got to lose?”, he quizzed.

DISCLAIMER: The Views, Comments, Opinions, Contributions and Statements made by Readers and Contributors on this platform do not necessarily represent the views or policy of Multimedia Group Limited.
Tags:
AM Show
Breaking the 8
KKD
NDC
NPP