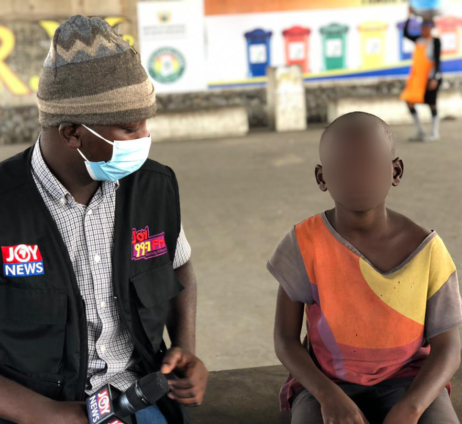 Born and raised in the border town of Sampa, somewhere in the Bono region, ten-year-old Ebenezer Opambour was excited about the prospects of visiting Accra for the first time.

But he will be left on his own shortly after arriving with his mom, who is now mentally challenged.

Little Ebenezer now roams the streets of Accra by day and joins other squatters to sleep at the underbridge of the Kwame Nkrumah interchange at night.

As sanitation officers of the AMA stormed the area to clear illegal occupants Wednesday, what he knew to be home went away too.

“I sleep under the overhead. My mother brought me from Sampa North in the Bono Region. But now I don’t go to school”, Ebenezer narrated.

Several older squatters could be spotted sleeping on cardboards, piles of pavement bricks, and dirty clothes from a distance. Not even the rocks planted as spikes could stop them from occupying the pavements.

But why were they there?

“Everyone can sleep here because we are all hustlers”, one of them retorted when asked why he was at the underbridge.

Another one said, “I don’t have mother and father on this earth; that’s why I’ve chosen to be on the streets”.

But Ebenezer was younger, and so it was difficult to miss him. So why was he under the bridge on a Wednesday morning and not in school?

I will later find out his mom is mentally challenged, a reason little Ebenezer has been left roaming Accra’s perilous streets all by himself.

“I’m afraid a car will knock me down, but my family members are in Sampa North. So Rasta has been giving 1 cedi to buy food”, he explained.

The closest thing to a family Ebenezer knows in Accra is ‘Rasta’. So the 27-year-old himself, also homeless, goes about hustling to be able to give Eben 1 Ghana cedi for food. But they could go days without any proper food.

Rasta explained, “life is hard on the streets. I saw him and even got touched. So I decided that if I get the money, I’ll give him 1 cedi or 2 cedis. I try to keep him close by”.

Like Eben, hundreds of kids are roaming the streets of Accra in search of warmth and support from a society that is constantly failing them. For now, though, that’s all he has.

The target groups included Kayayei, hawkers, children who are beggars, adult beggars, and those contracted to push physically challenged persons. The rest are persons with disabilities, persons with mental health problems, families on the streets, displaced persons (international migrants) and ‘begging contractors’.

DISCLAIMER: The Views, Comments, Opinions, Contributions and Statements made by Readers and Contributors on this platform do not necessarily represent the views or policy of Multimedia Group Limited.
Tags:
Accra Metropolitan Assembly
Sampa North
Streetism