'I was present in Parliament' - Adwoa Safo reveals - MyJoyOnline.com

‘I was present in Parliament’ – Adwoa Safo reveals 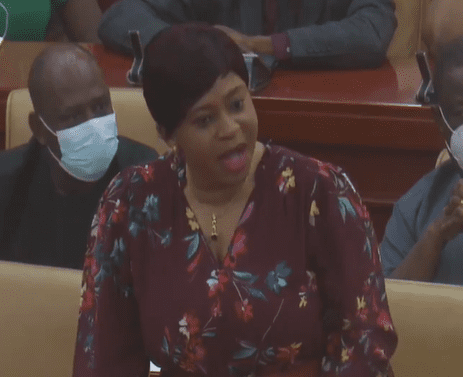 The Dome-Kwabenya MP, Sarah Adwoa Safo, has dispelled allegations by the Minority that she was absent from Parliament on Tuesday when the House approved the 2022 budget.

Addressing the House on Wednesday, Adwoa Safo indicated that she was present and voted to rescind the earlier decision by the House to reject the 2022 budget.

Her comments come as a reaction to a statement by North Tongu MP, Samuel Okudzeto Ablakwa, who disclosed on Joy FM that the Minority in Parliament is investigating a case of impersonation of the Dome-Kwabenya MP, Sarah Adwoa Safo.

JoyNews/AdomNews · ‘I was in Parliament’ – Adwoa Sarfo reveals

He told hosts of the Super Morning Show that the Minority side suspects the lady who was present in the House on Tuesday is not the Dome-Kwabenya MP.

According to Madam Safo who doubles as the Gender Minister, the allegation is an insult to womanhood; thus demanded an immediate withdrawal from her colleague, Okudzeto Ablakwa.

“Mr Speaker, that is an insult on womanhood so those making that noise, Mr Speaker should withdraw,” she stated.

The Dome-Kwabenya legislator walked into the Chamber without a nose mask. Her entry attracted loud cheers from members of the Majority Group despite the fact that the Minority Leader, Haruna Iddrisu, was addressing the House on their disapproval of the budget.

Prior to her reaction, the Member of Parliament for Okaikoi Central, Patrick Yaw Boamah had said that his colleague Sarah Adwoa Safo was present in Parliament on Tuesday when the House approved the 2022 budget.

According to Mr. Boamah, the Dome-Kwabenya MP attended a Majority caucus meeting and interacted with some legislators present.’

He also made this known on Joy FM earlier on Wednesday in reaction to Mr. Ablakwa’s claims.

“My goodness. Adwoa was in the House. We even had a caucus meeting and she was there. Everybody had a chance to talk to her. I am surprised. They shouldn’t be shifting the goal post,” he noted.