I was unable to fulfill all my promises, the first term was a learning process – UW NPP Chair appeals to delegates - MyJoyOnline.com

I was unable to fulfill all my promises, the first term was a learning process – UW NPP Chair appeals to delegates 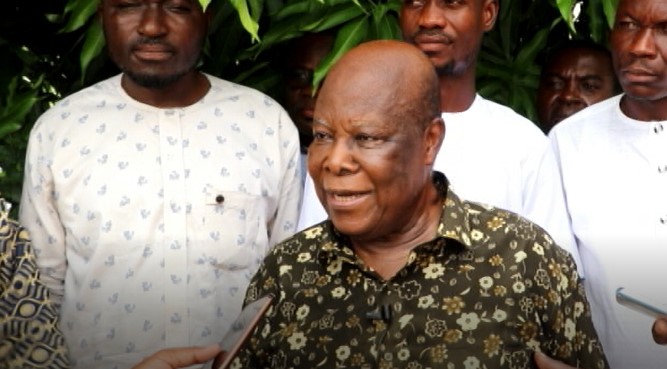 Upper West Regional Chairman of the New Patriotic Party, S.B. Kangbere says he is seeking a second term because he was unable to fulfill all his promises in the last four years.

According to him, the last four years were a learning process.

The 74-year-old retired Saudia Arabia University English lecturer won the Upper West Regional Chairmanship of the NPP four years ago with a plethora of promises.

He said that given another opportunity as chair of the party, he will be able to achieve more than he did in the past four years.

“Promises were made but unfortunately we could not carry out all those promises. Remember when I was coming, I said I was going to stop this cheating in the school feeding programme unfortunately I have not been able to stop that. I thought that maybe one year or two years would have done it. Unfortunately, I needed all four years to learn.

“Now it is time to do the work and I am hoping that with the next set of four years I would probably be able to achieve more than I did previously,” he stated.

S.B. Kangbere is being challenged by businessman Alhaji Toyiba Mahama who is contesting for the party’s Regional Chair for the third time.

Alhaji Toyina Mahama said the party’s morale in the Upper West Region has dwindled and it will take a chairman of his caliber to galvanize support in the Region.

“The party’s breathe has gone down to the extent that people say the party is dying in the Region. So the party needs a young vibrant person like Alhaji Toyiba Mahama to cushion the party up in terms of party activities and party organisation. If you come to Upper West, you would say the only party here is the NDC and this has to do with the leadership of the party. My message is they should also try me, I will deliver what I have,” he noted.

The New Patriotic Party will conduct its regional elections from May 27 to May 29, 2022.

Joy News’ Upper West Regional correspondent, Rafiq Salam has revealed that there are 35 aspirants gunning for the 10 regional executive positions in the region.