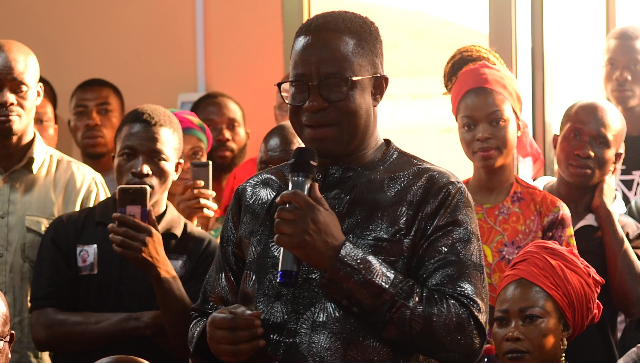 Energy Minister John Peter Amewu has promised to ensure both physical and human development in the Hohoe constituency in the Volta Region if voted as the next Member of Parliament.

According to him, he has already exhibited his commitment to helping restore Hohoe’s past glory within the past few years of the NPP government.

He, therefore, called on the Gbi Traditional Council and the entire constituency to support his bid to represent the Hohoe constituency in parliament.

Mr Amewu said this when he visited the Council to sign the book of condolence for the late Gbi Paramount Chief, Togbega Gabusu VI.

”Our forefathers who were politicians couldn’t develop Hohoe for us. But today, there is an assurance that I will develop Hohoe. People of Hohoe, the Gbis, my brothers and sisters in the Zongos, support me and do what I want, and I will also deliver on my promises”, he said.

Speaking on behalf of the Gbi Traditional Council, Chief of Gbi Atabu Togbe Adzofusu, asserted that Mr Amewu had distinguished himself as an individual who would harness development in the constituency if given the needed push.

”Have we ever witnessed the level at which street lights are provided in our communities, boreholes being drilled in the area, as it is happening now? The Provision of educational scholarships, construction of a sports stadium, has it ever happened?” he quizzed.

The traditional ruler lauded Mr Amewu on his development agenda for the area and urged the electorates to critically examine the parliamentary candidates for both the National Democratic Congress (NDC) and the New Patriotic Party (NPP), ”to identify which of them if voted for would bring progress in their lives.”

”Togbe Adzofuwu does not belong to any political party. But I will gladly praise anybody who does good for his people”, he stressed.

He, however, called on Mr Amewu to support provide a befitting burial for the late Togbega Gabusu VI who died after an illness in 2019.