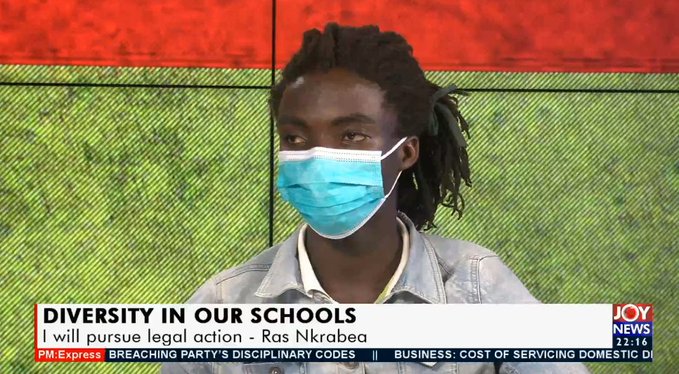 One of the students at the centre of a controversy over dreadlocks in second-cycle institutions, Tyron Marghuy has vowed not to sacrifice his hair for enrollment in Achimota School.

According to him, the school authorities’ resolve in getting him to trim the hair before he is allowed on campus is completely discriminatory.

Tyron is one of two students who refused to cut off his dreadlocks as the only condition blocking their admission into the second-cycle institution.

The Ghana Education Service over the weekend directed that the school admits the students but the Headmistress insists otherwise.

However, Tyron Marghuy says keeping dreadlocks is a belief of the Rastafarian; a religion he associates with.

“As per my age, I go with my dad’s religion just as in every home. Because if your Mum or Dad has a religion, you as a kid, you may want to go with your Dad’s religion. So long as I’m under their shelter and care, I will want to go with their religion even if it will cost me my education,” he told Evans Mensah on PM Express Tuesday.

Meanwhile, spokesperson for the National Chief Imam has lamented the boys’ situation considering the fact that their colleagues are already in the classroom undertaking academic work for the 2021 academic year.

According to Sheikh Aremeyaw Shaibu, the religious circumstances surrounding the hairdo must be prioritised over the fashion argument.

“I think we must also accept that dreadlocks for some people are a matter of fashion. And those ones we need to know how to handle. But those that are based on a certain kind of belief and those beliefs are part of our identity and non-negotiable, it is important that we go ahead with a dialogue,” he told host, Evans Mensah.

DISCLAIMER: The Views, Comments, Opinions, Contributions and Statements made by Readers and Contributors on this platform do not necessarily represent the views or policy of Multimedia Group Limited.
Tags:
Achimota School
Admission
Dreadlocks
Tyron Marghuy