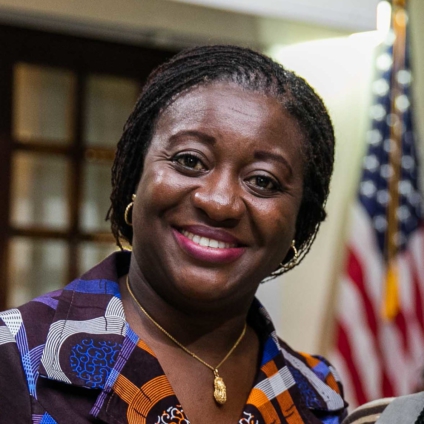 A former flagbearer of the Progressive People’s Party (PPP), Brigitte Dzogbenuku has asserted that the letter from the Inspector General of Police to the British High Commissioner, Harriet Thompson was because of the latter’s gender.

According to her, the former British High Commissioner, Jon Benjamin and other past diplomats commented on issues in Ghana, but were not met with responses like the one contained in the IGP’s letter.

She therefore suggested that Harriet Thompson’s gender is what informed the IGP’s four-paged letter, in which he asked the diplomat to mind her business.

“I tend to be very gender conscious and we’ve had Jon Benjamin and the other one who used to ride the bike say and write many things. Has there ever been a response like this? For me, I have always said that I have felt intimated by Ghana Police as a woman.

And maybe, this is the time for them to redeem that image. I have met the British High Commissioner, and it’s almost as if let’s intimidate her, shut her up. And you won’t do this if she were a man”, she lamented.

When host, Benjamin Akakpo asked if she was indeed saying that the IGP’s letter was because Harriet Thompson was a woman, Brigitte Dzogbenuku emphasised that, ‘That too”.

The former PPP flagbearer added that the IGP’s approach was synonymous with using a sledge hammer to kill a fly. She therefore advised that instead of the IGP’s four-paged letter to the High Commissioner, he should have resorted to a more measured approach in expressing his grievances.

“First of all, I didn’t think in my opinion that it was in the place of the IGP to send the response. And I think that they’re addressing that. As of last night, I heard that the Minister of Foreign Affairs was going to take it up.

So that was a good idea. That ought to have been done before. The IGP ought to have sent or relayed his message to the High Commissioner through the Foreign Minister. That’s the best way to do it. It was terse. It was like using a sledge hammer on a fly really. Because it was a little tweet. And the response was over the top if you like”, she said.

She further indicated that, the tweet by the British High Commissioner was ambiguous, and not a confrontational comment, as the IGP appeared to have deduced.

In her submission, Brigitte Dzogbenuku stressed that as a representative of the Queen, the High Commissioner is at liberty to express her views on issues, and therefore it was wrong for the IGP to have reacted in the manner he did; especially when the tweet did not spell any doom or havoc whatsoever.

It will be recalled that on May 17 this year, Harriet Thompson tweeted about the arrest of the Convener of the FixTheCountry Movement, Oliver Barker-Vormawor.

In her tweet, she said, “Oliver Barker Vormawor, convener of #FixTheCountry movement, arrested again, I understand for a motoring offence on his way to court. I’ll be interested to see where this goes…”.

This was after the lead convener of the #FixTheCountry Movement, Oliver Barker-Vormawor, was taken to the East Legon Police cells and arraigned before the Madina District Court.

He was charged with careless and inconsiderate driving.

Barker-Vormawor subsequently announced the charge on his personal Facebook page.

But on May 31, a letter from the the Inspector General Police, Dr George Akuffo-Dampare, became the topic for discussion after it was allegedly leaked into the public domain.

In the letter, the IGP had written to Harriet Thompson to mind her own business and desist from meddling in the country’s internal affairs. According to him, the High Commissioner’s tweet was in violation of the Vienna Convention on Diplomatic Affairs.

In a four-page letter signed by the Inspector-General of Police (IGP), Dr George Akuffo-Dampare and sighted by JoyNews, the IGP noted that Ms Thompson’s act was unprofessional and seeks to undermine the credence of the Ghana Police Service.

“For the moment we will recommend the Ghanaian saying, that might guide you in your diplomatic engagements. The saying goes ‘Di wo fie asem’ to wit learn to keep within the limits that concerns you”, the letter concluded.

Meanwhile, the Ministry of Foreign Affairs and Regional Integration has intervened to mediate the dispute between the IGP and the British High Commissioner.

The Ministry in a press release indicated that it “has noted with concern the intense public debate that has been generated by the communication between the Inspector-General of Police (IGP) and the British High Commissioner in Accra”.

“In line with the general diplomatic practice of communicating with diplomatic Missions, preferably through direct engagement, the Ministry wishes to remain circumspect on its pronouncements on the matter”, portions of the release stated.

DISCLAIMER: The Views, Comments, Opinions, Contributions and Statements made by Readers and Contributors on this platform do not necessarily represent the views or policy of Multimedia Group Limited.
Tags:
Barker-Vormawor
Brigitte Dzogbenuku
British High Commissioner
Dampare
Harriet Thompson
IGP
PPP