‘I’m blind, but loved going on a must-see safari’ 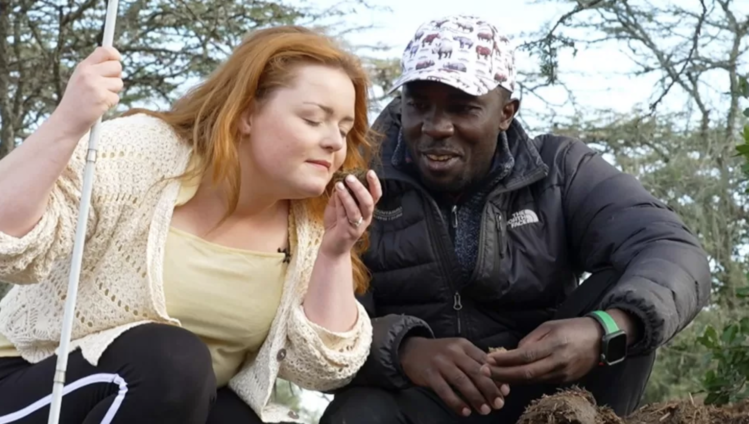 Going blind made me worry I would never be able to enjoy a holiday again. What would be the point of sightseeing? And yet, I have just been on one of the most amazing trips of my life.

Wearing my lovely new walking boots, I suddenly realise I have stumbled on a “midden” – a pungent pile of rhinoceros poo. With every gust of wind I get a fresh whiff.

I am at the Ol Pejeta Conservancy – a 90,000-acre wild animal sanctuary on the equator in Kenya. The keepers there let me reach out and touch the skin of a rhino called Baraka. Like me, Baraka is blind

His skin is not as smooth and lizard-like as I expected it to be – it feels rough, like cardboard.

He lost his right eye in a fight with another rhino – and a cataract stops him from seeing out of his left eye. He has to be kept alone because other rhinos would attack him – and his keepers tell me he can be nervous about moving around. Trees in his big enclosure have damaged trunks and broken branches, from where he has walked into them.

I sympathise with him. I was also nervous when I was asked to travel halfway around the world on a trip which, for most people, would be the opportunity of a lifetime.

Not only would it be very different from my usual life of advocacy work for the UK’s blind and partially sighted community – both in person and on YouTube – but it would also mean leaving behind my beloved guide dog, Molly.

I lost my sight nearly 10 years ago – when I was 17 – due to a genetic condition. It took me a while to get used to going on holidays as a non-sighted person, which I used to view as just a really expensive way of basically being in my back garden.

I now know I can still enjoy foreign travel, despite not being able to see – but going on a safari? Surely it’s a “must see” experience?

I felt a lot better after I met my safari guide, William. He had taken a blind person on a similar trip once before – but, because every non-sighted person has varying levels of visual acuity, we still needed to get to know each other.

My visual memories of most things – including wild African animals – are almost completely gone. Those that remain are like a series of photos which have been locked in a drawer in my brain for the past decade. If I try to recall an elephant for example, a visual memory comes out of the drawer of an animal tapestry my sister had on her bedroom wall when we were children.

So I was going to have to start from scratch and make sure I got a great experience from using my other senses. I know it may sound weird, but I genuinely don’t miss having my eyesight, and even in Kenya I didn’t spend time wishing I still had it.

First, William took me to a museum in Nairobi where I was allowed to touch stuffed exhibits. I rely so much on my other senses now, so to be able to reach out and feel the skins of elephants and giraffes really helped me start to “see”.

My senses then really started to awaken as we drove out from the city in our four-wheel drive vehicle. The ground became so bumpy as we sped along, and the car smelled of sand which wafted into my face in the wind. I wore sunglasses and put my head out of the window – I really wanted to drink in the atmosphere.

At the Ol Pejeta sanctuary, William and the keepers brilliantly described the rhinos and elephants in front of us – how they were moving, eating, reacting to us and each other. It all helped paint pictures in my head. James Mwenda, a global ambassador for the sanctuary, crouched down with me and we felt the footprint of a rhino in the dusty ground.

We then put our hands in a pile of dung. Much of it is just semi-digested grass, he told me. I gave it a good sniff – it just smelled of grass that had “gone off”.

We drove in search of lions – tracking a special collar worn by one of the lionesses who, like me, is called Lucy. We pulled up slowly alongside her – she was fast asleep. We were so close I could hear her breathing through the window.

I asked William if she looked like the lions in The Lion King? That was the last image of the animals I had stored in my memory vault. Yes – he told me. And her cubs, close by, looked just like the movie’s young hero, Simba.

The sensory overload continued on our midnight safari. It seemed as though I could smell so much more than in the daytime, and hear every little sound. I was so lucky to experience a bush kill.

We had suddenly heard a loud screeching noise. We drove quickly, over really bumpy ground, down into a ditch. I then listened as two lions chased a herd of buffalo – before hearing the sound of bones cracking and flesh being chewed. It was such a privilege.

We then headed south to the Masai Mara game reserve – the wild Africa of storybooks. We pulled into a village of the Maasai tribe and, before I even had the chance to get out of the car, we were surrounded by local women trying to sell us carved wooden animals. It was crazy. I bartered with them and bought two giraffes.

Flies buzzed around my face as we walked, and I could hear bells clanking – I was told they were tied around the necks of goats. In a hut, with the smell of wood all around me, I tried on some traditional Maasai clothing. Tartan patterns and lots of red, I was told. I loved the feel and noise of the beaded jewellery which I also wore.

Outside, I was then treated to an amazing audio experience – traditional Maasai singing and chanting. A wall of sound was all around me.

I had really wanted to experience the sounds and smells of the “great migration” – when millions of wildebeest and other herbivores, like zebras, make the dangerous trip from the Serengeti in Tanzania to Kenya in search of fresh grass. Predators – big cats and crocodiles – wait to pick off the weakest travellers.

Deep in Masai Mara, in the early morning, we found tens of thousands of the animals. They were all around us. Herd leaders were calling out, making moaning sounds. The noise was everywhere – like it was in 3D.

I held a small wooden model of a wildebeest, as William described the sight before us. Wildebeest have very weak legs compared to the size of their bodies, he told me, and some will break bones when they jump in rivers to cross. The top is like a horse, with horns like a cow and a beard like a goat.

The giant herd set off for another day’s travelling. I could hear the pit-pat of hooves on the ground and then, as they tumbled down a riverbank, the sound of water sloshing around.

Being on safari had been amazing, but there was one experience which I had really worried about – because I wasn’t going to be able to see it. It was the so-called “sundowner” moment, when people sit and have a drink at the end of the day, watching the sky turn orange and red as the sun disappears over the horizon.

But when the moment actually came, there was no sunset – it poured with rain instead. I cried happy tears. It was as though the world was letting me know that I didn’t need to see the sun.

It hadn’t rained for weeks and weeks, but the heavens had opened just for me. The giant raindrops, and the sound they made as they splashed down, felt like a perfect sensory end to what had been the best trip of my life.

DISCLAIMER: The Views, Comments, Opinions, Contributions and Statements made by Readers and Contributors on this platform do not necessarily represent the views or policy of Multimedia Group Limited.
Tags:
Ol Pejeta Conservancy
Safari