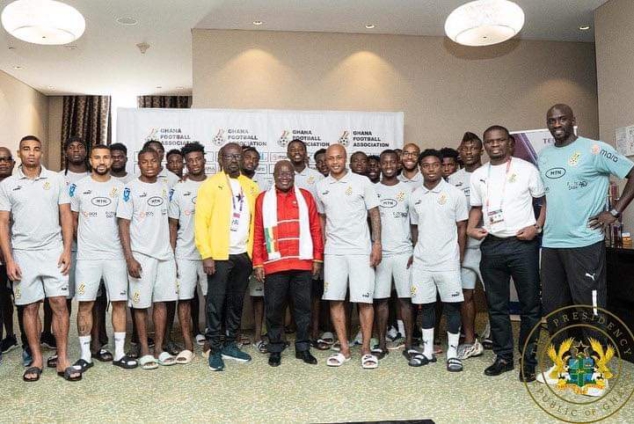 In a Facebook post after the match, he described the team’s efforts as a ‘gutsy performance’ worthy of commendation.

According to him, even though the team could not secure the necessary points, they still proved their mettle and displayed their ability to withstand every other opposition.

On that note, he urged Ghanaians to throw their weight behind the Black Stars; stressing that he believes Ghana can progress to the next stage of the competition.

“Gutsy performance by the Black Stars in today’s match against Portugal. Very proud of the entire team. They live to fight another day, and have shown they have what it takes to mix it up against any team in the tournament”, Akufo-Addo remarked.

“Looking forward to the next game against South Korea, and I urge all Ghanaians to rally strongly behind the team. I am confident we can qualify from this group. #GoBlackStarsGo”, he added.

On Thursday, the Black Stars put up what many have described as a ‘spirited performance’, in their opening Group H game against Portugal.

however after the end of 90 minutes, the Portuguese managed to carry the day by a slender lead of three goals to two.

According to some football fans and pundits, the victory of the Europeans was aided by the bias of US referee, Ismail Elfath, who has since been heavily criticised for his ‘poor officiating’.

Manager of the side, coach Otto Addo also believes that the referee did his team a lot of damage with some questionable decisions.

In a post match press conference, he described the penalty which gave the Portuguese the opening goal, as a ‘gift from the referee’.

He therefore berated the referee for his officiating on the day.

The Black Stars currently sit at the bottom of Group H with no points to their name.

Meanwhile, the team will play South Korea on Monday, in their second Group H encounter, as they seek to grab some points to enhance their chances of progressing to the next stage of the competition.

The match against the Taegeuk Warriors of South Korea will be played at 1:00pm on Monday 28th November 2022, at the Education City Stadium in Doha, Qatar.

DISCLAIMER: The Views, Comments, Opinions, Contributions and Statements made by Readers and Contributors on this platform do not necessarily represent the views or policy of Multimedia Group Limited.
Tags:
2022 FIFA World Cup
Akufo-Addo
Black Stars
Ghana
Portugal
Qatar 2022