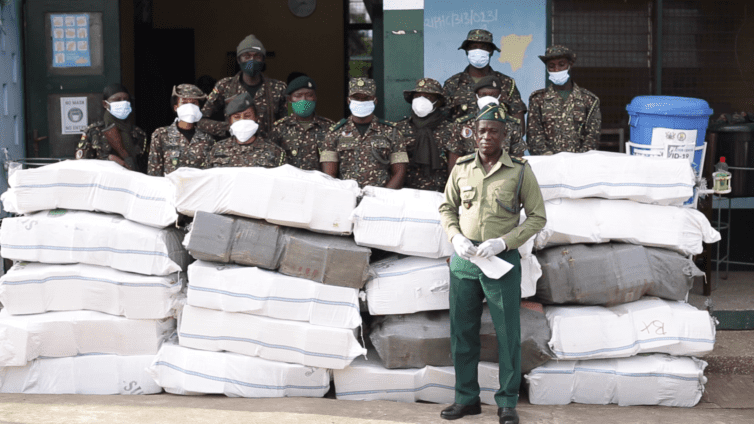 The Ghana Immigration Service (GIS) has intercepted about 1,490 slabs of substances suspected to be Indian Hemp along the Togolese border in the Nyive sector.

The substances were hidden in a bush concealed in sacks with an unregistered Royal motorcycle in the environs of Atikpui, in the Ho Municipality of the Volta Region.

Each of the sacks contained an average of 80 parcels of the suspected substance, labelled as ‘3’, ‘5’, ‘Bx’, and ‘Boss’ waiting to be smuggled into Togo.

He praised the efforts of his unit for their rapid response but lamented the poor support and aggression of residents towards the team during such operations, attempting to prevent the border securities from discharging their duties.

“We had to fire warning shots to keep the aggressive town folks at bay and give us space to perform our duties”, he said.

He further sent a solid caution to people involved in smuggling and engaging in cross-border crimes to cease such acts.

“We have monitored the activists of those involved in this illicit business for a long time, but yesterday was their time and God willing, we were able to move swiftly based on surveillance and monitoring.”

“My men were able to respond to the call that I placed to them, and within a few minutes, we were at the spot that made us intercept this gargantuan substance suspected to be Indian hemp”, he said.

“We know they also have intel, and we’ll catch up with them”, he stressed, assuring that the people attempting to smuggle the 1,490 slabs of suspected Indian Hemp would soon be arrested.

DISCLAIMER: The Views, Comments, Opinions, Contributions and Statements made by Readers and Contributors on this platform do not necessarily represent the views or policy of Multimedia Group Limited.
Tags:
Ghana Immigration Service
Narcotics
Nyive
Volta Region