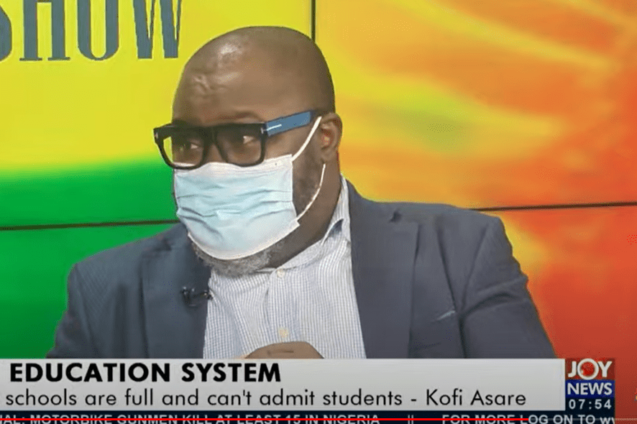 The Executive Director for Africa Education Watch, Kofi Asare has bemoaned the level of investment into basic education by the government.

According to him, the country has not invested enough into basic education.

This, he said has led to some public primary schools not admitting students due to inadequate capacity.

Speaking in an interview on the AM Show on JoyNews, on Monday, Kofi Asare suggested that government must increase capital expenditure on basic education infrastructure in the country.

“As we keep decreasing the budgetary allocation and the expenditure allocation to basic education, all you are doing is that you are actually reducing the number of schools you can build in a year. There were times we were building 500 schools in a year, if in a year we build 100 primary schools then it means that there is limited money available.

Now, look at the budget, in 2019 the Capital expenditure (CapEx) budget of the Ministry of Education from which schools are built is a little above one million cedis and that was 6.7 per cent of the entire education sector. Out of the 6.7, majority of the money went into the secondary education sector, basic had very low,” he told Israel Laryea on the AM Show.

Mr. Asare noted that the capping of the Ghana Education Trust Fund (GETFUND) is causing a huge toll on basic education infrastructure in the country.

“GETFUND is the biggest source of infrastructure development in the education sector for basic schools. But GETFUND has suffered a setback in the past four years. Since 2017 when the Finance Minister went to Parliament and got Parliament to pass the capping Act, the law capped GETFUND at 25% in addition to other statutory funds. The effect of the capping on GETFUND allocation is that irrespective of the inflow, GETFUND allocation is capped at 25 per cent…so the capping of GETFUND is hurting basic education infrastructure,” he said.

According to Kofi Asare, the capping of GETFUND means that the statutory funds have been restricted therefore denying vehicle for educational projects and programmes of enough resources to complete existing projects and embark on new ones at the basic level.

He explained that the capping in essence is reducing government expenditure and preventing the building of basic schools particularly.

He urged the government to build more schools to ensure that it bridges the gap between the number of Primary Schools and Junior High Schools in the country.

Suggesting reforms to address the disparity, Mr. Asare reiterated the need for the Finance Ministry to re-look at the capping of GETFUND.

“The Finance Minister must take a second look at the capping of GETFUND, because it is hurting the ability of the Ministry of Education to provide schools at the basic level. Especially, in peri-urban areas and some rural areas where we have schools taking place under trees,” he noted.

Africa Education Watch had earlier appealed to the Finance Ministry to increase the capping of GETFUND from 25% to 50%.

In a recent report by Africa Education Watch and other partners, one of the findings revealed that more than 400,000 children, approximately 1 in 4 pre-primary age children are still not enrolled in kindergarten, with over 147,000 dropping out between kindergarten and Junior High School.