Indonesia football crush: ‘It was too much to see my son’s dead body’ 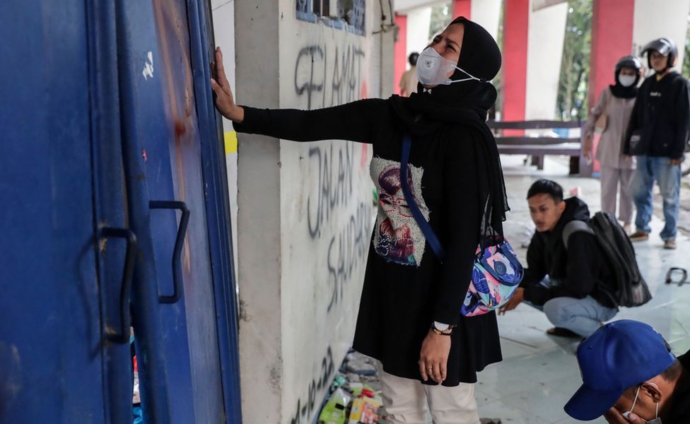 A woman weeps outside the stadium's doors, bent off their hinges from the crowd on Saturday

Nineteen-year-old Mohammad Hafis wasn’t supposed to be at the Kanjuruhan stadium on Saturday night. He didn’t have a ticket.

But he and his girlfriend had managed to get entry wristbands.

It was one of the ways their bodies were identified by their parents hours later, wandering the corridors of a packed hospital in the aftermath of the stadium tragedy in Malang, Indonesia.

At least 125 people – many of them teenagers like Mohammad – died in a stampede at the stadium triggered by police firing tear gas at spectators.

Officers had responded in this way to quell fans of the losing side Arema FC who stormed onto the pitch after the final whistle.

But the stinging volleys – also sprayed at fans in the stands, witnesses say – left people blinded and gasping for air. That sparked a mass exodus; fans fled to the stadium’s exits where many of them died, trampled or suffocated.

Mohammad’s father, Alif, remembered walking through the hospital corridors hours later, wondering if his only son was alive. He told his wife to be strong.

“When I was shown my son’s dead body, I stood back. I didn’t want to see him. It was too much,” he told the BBC.

“Deep inside I am crying. But I have to let it go.

All games in the Liga, Indonesia’s top football flight, have been cancelled as the nation grapples with the huge tragedy.

A devastated community is demanding answers and accountability for such a huge loss of life. Many of the dead were keen football fans, young men and women. At least 32 children died in the melee, including a toddler.

On Monday, 22-year-old survivor Aris Usmatul went back at to the stadium to lay flowers.

But she found herself overwhelmed by the memories. She said she was horrified when she made it out of the gates on Saturday to find bodies on the street and people collapsed around her.

“Why didn’t the police fire the tear gas onto the pitch? Why did they fire it into the stands? There were a lot of women and children and many of the gates were locked. They couldn’t get out.”

Indonesia’s government has decreed a 50 million rupiah (£2,890, $3,300) compensation for each of the victims’ families. President Joko Widodo has ordered an investigation – pledging to root out the perpetrators and punish them. The investigation should be done in two to three weeks, officials have said.

Questions are being asked of the match organisers. The stadium was over-capacity, which exacerbated the problem. There were 42,000 tickets sold for a 38,000-seat stadium, according to a government minister.

But public anger has been more squarely directed at the police and their use of tear gas.

The world’s governing football body Fifa’s says that “crowd control gas” should not be used at matches – a guideline that is frequently ignored in Indonesia.

Several witnesses have told the BBC they think the crowd’s stampede could have been averted. Indonesian and international human rights groups have also emphasised this point, as have security experts.

“Why did police use tear gas and shoot it into the stadium area, when the real problem was on the pitch? Where were crowds going to go?” Jacqui Baker, a policing expert from Murdoch University told the BBC.

She also highlights the violence displayed by police and the military, who had also been seconded to the match. Authorities have revealed about 2,000 officers – including several police units and soldiers – were present that night.

National police authorities have sacked the local chief in Malang. They have suspended another nine officers and said dozens more were under investigation.

Officials didn’t provide details on their role in the disaster, but said the use of tear gas was being looked into. Local police had previously said they deployed tear gas to prevent anarchy.

Football violence has long been a problem in Indonesia, where violent rivalries between major teams are common.

But Saturday’s tragedy only involved the home town’s fans of Arema FC, after organisers had earlier banned the opposing side’s fans from visiting.

Back at Kanjuruhan stadium, hundreds of people have lined up to lay flowers, sprinkle rose petals and pay their respects.

Fans once flocked here to show their love of football. Now crowds gather for a different reason, to this focal point of raw grief.

Arema footballers have also returned to pay tribute. Wearing black armbands, several of them in tears, they kneel on the pitch and pray.

Piles of shoes are still strewn around the stadium’s perimeter. Protest signs can be seen among the tributes and crying mourners, and messages are graffitied on the walls.

One read: “My sibling was killed. We demand a thorough investigation.”

DISCLAIMER: The Views, Comments, Opinions, Contributions and Statements made by Readers and Contributors on this platform do not necessarily represent the views or policy of Multimedia Group Limited.
Tags:
Football crush
Indonesia