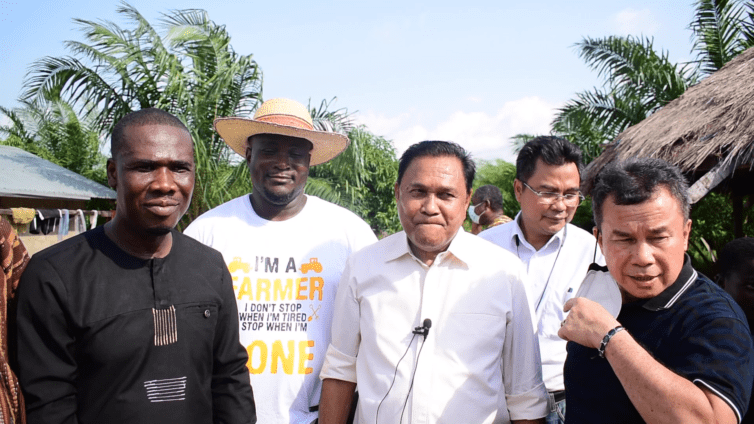 The Indonesian government has commenced implementing an initiative aimed at promoting the growth of Ghana’s private sector to enhance bilateral trade between both countries.

The Asian country as part of the initiative, would provide machinery, technological support and expertise in agriculture, industry, oil exploration among others, to players in the private sector.

Through the Indonesian Embassy in West Africa headquartered in Lagos, Nigeria, a Memorandum of Understanding would be signed between investors and industry.

The Indonesian Honorary Consulate in Ghana led a delegation to explore opportunities in the agricultural sector in the Central Tongu District of the Volta Region and partner with identified farmers towards promoting agribusiness.

The DCE, Thomas Moore Zonyrah, made known the varied resources and agricultural potential of the district and assured of the Assembly’s utmost support to the initiate, including helping the investors to acquire farmlands among others.

The team after paying a courtesy call on the DCE, proceeded to visit some selected farms in the Mafi Anfoe enclave.

Unfortunately, halfway through the journey, the team, made up of Dr. Usra Hendra Harahap, the Ambassador of Indonesia in charge of West Africa, and some investors experienced what farmers go through to cart their produce to the markets.

One of the Assembly’s vehicles got stuck in a muddy section of the access road, several attempts to pull the vehicle out of the mud by the team members proved futile.

The Honorary Consul of the Republic of Indonesia in Ghana, H.E. Paskal A.B. Rois lamented the situation but believes a Public-Private Partnership would help resolve the challenge of deplorable roads.

The delegation eventually got to the farmyard of Shining Green Farm and Foods where over 100 acres of coconut are being cultivated.

Cassava, pawpaw, and vegetables are also cultivated on a large scale, coupled with livestock.

The Founding-Managing Director, Curtis-Shyne Aboetaka, said he is currently cultivating 1,200 acres of farmlands adding that he exports cassava chips, cassava flour, processed shea butter among others.

He appealed to the investors to make funding available to enable them get requisite inputs, technology, and partnerships to expand and increase yield.

He made known his intention to export the end product, palm oil, but lamented the lack of machinery to use to add value to the palm produce.

Senator and Former Governor of Aceh, Indonesia, Abdullah Pateh, who is an investor in agribusiness promised to make available expertise and logistics as part of a partnership deal with the two farms.

H.E Pascal Rois explained that the Indonesian Consul aims beyond agribusiness. He enumerated education, infrastructure, socio-culture, oil and gas exploration in Ghana among others as sectors to introduce investors to industry players.

The Ambassador of Indonesia in charge of West Africa, Dr. Usra Hendra Harahap expressed optimism that the partnership would promote growth the industry and enhance trade between both countries.

The two farms and the investor would sign a memorandum of understanding to cement their partnership, which the farmers believe would propel their agribusiness.

DISCLAIMER: The Views, Comments, Opinions, Contributions and Statements made by Readers and Contributors on this platform do not necessarily represent the views or policy of Multimedia Group Limited.
Tags:
Agribusiness
Central Tongu
Indonesia
Volta Region