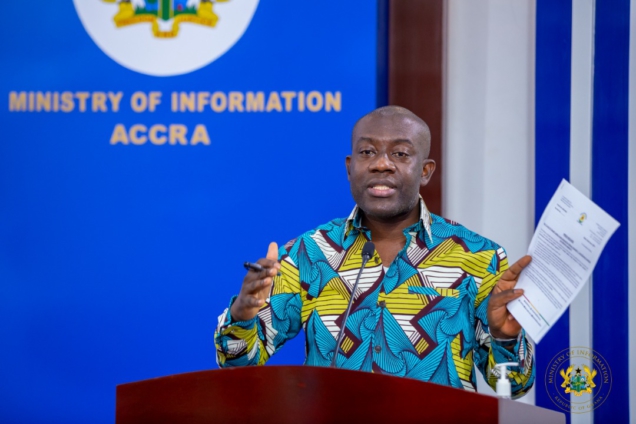 The Minister for Information, Kojo Oppong Nkrumah has condemned the violence that took place in Ejura in the Ashanti Region on Tuesday.

The clash between the security officers and youth, who in a protest were demanding justice over the murder of social activist, Ibrahim Mohammed, also known as Kaaka, resulted in the death of two residents.

Four other people including a military officer were also injured.

Addressing the press in Accra on Wednesday, June 30, Mr. Oppong Nkrumah admonished the security agencies to expedite investigations to find the miscreants behind the attack on Kaaka and the circumstances surrounding the Tuesday violence in Ejura.

The Minister said: “Our security agencies should be quick and clinical in getting to the bottom of this and other unresolved ones. While we understand that police investigations sometimes take a while, it does not instill confidence in the population if such acts go unresolved and unpunished. So the police need to get to the bottom of this, and justice must be done.”

“A credible investigation also needs to be conducted into the crowd rioting and crowd control incidents of June 29. This will bring clarity to the sequence of events and ensure that if any persons acted inappropriately, those persons are punished,” he added.

He, therefore, appealed for calm as the security agencies work to bring the perpetrators of the heinous crime to book.

Social activist, Ibrahim Mohammed was pronounced dead on Monday afternoon, June 28, at the Komfo Anokye Teaching Hospital (KATH) in Kumasi where he was receiving treatment. Before the unfortunate incident, Ibrahim Mohammed accused the bodyguards of Ejura MCE of threatening his life for making the government unpopular.

Meanwhile, the police have picked up two suspects in connection with the murder of the social activist.

Also, the Ashanti Regional Police Command has disclosed that it has commenced investigations into circumstances leading to the death of the two people in Ejura Sekyedumase.

Its press statement dated June 29, indicated that calm has been restored in Ejura and “the Regional Command has taken over investigations into the murder of Kaaka”.

“The Police moved in with Military reinforcement to quell the situation but the irate youth charged on the security officers with all manner of tools including firearms, clubs, machetes and stones.”

“The security officials fired shots to disperse the angry mob who failed to retreat. They rather massed up at all corners. The death and injuries were recorded in the process,” portions of the press release read.