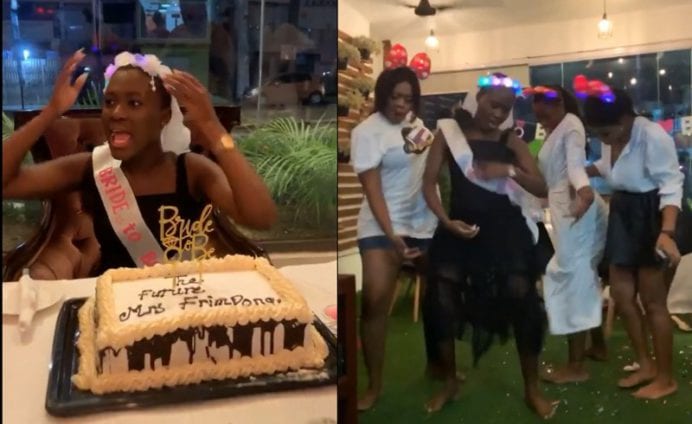 It’s finally happening. The preparation for the much-anticipated engagement ceremony of rapper Medikal and his girlfriend Fella Makafui, on March 7, seem to be taking off smoothly.

As planning goes on, in a video that has gone viral online, the bride-to-be is seen having fun with her friends to cap off her days as a single lady.

The bridal shower was filled with friends who kept congratulating the bachelorette and ushering her into a new life.

She wore a black dress with a white veil attached to a flower-like crown while her friends were dressed in white.

The girls danced to some of Medikal’s hit songs including ‘Omo Ada’.

Fella Makafui’s friends presented her with a cake that read “The Future Mrs. Frimpong”.

In another video, presents that would supposedly be shared were wrapped and placed in baskets and ready for the d-day, Saturday, March 7.

Video of Gifts to be shared at Medikal and Fella Makafui’s wedding tomorrow March 7 leaks. #dailycelebritiesnews

Medikal announced on Saturday, February 29, he would be tying the knot with his lady during his performance at the Pent Hall Week Celebration at the University of Ghana.

On Monday, an invitation to the ceremony, which will take place at Fella’s residence in East Legon, began flying around social media.

Many Ghanaians thought they were trying to pull a stunt for publicity.

The announcement came weeks after the couple’s public break up earlier that month.

DISCLAIMER: The Views, Comments, Opinions, Contributions and Statements made by Readers and Contributors on this platform do not necessarily represent the views or policy of Multimedia Group Limited.
Tags:
bridal shower
Fella Makafui
Medikal
wedding