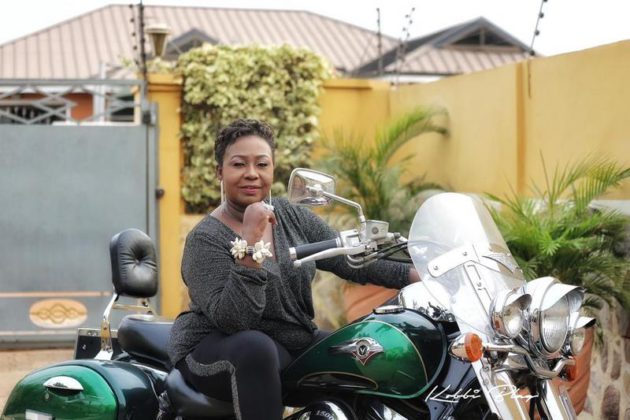 March 8 every year is celebrated as International Women’s Day across the world. The celebration of this day is key to the drive for women’s rights.

Today, we turn our lenses on Gifty Anti, a Ghanaian journalist and broadcaster giving and helping women understand their self-worth and letting them know that they are capable of doing something extraordinary if they dare speak up and put their potential and capabilities out there.

Gifty Anti is a native of Cape Coast in the Central Region but was born and raised in Tema. Her name has now become a household name, but there are some untold stories about this woman of substance a lot of Ghanaians don’t know.

So this affable woman sat for an exclusive interview with Ghana’s most comprehensive online portal, Adomonline.com.

She told Adomonline’s Dorcas Abedu-Kennedy nearly everything there is to know about what fuels her feminist drive.

Gifty Anti is the last of 8 children. Her parents had four boys and four girls.

In a question and answer interview, Gifty Anti said she was very close to her dad who raised her to believe in herself. He also made her believe that she could achieve anything and everything with determination and perseverance.

“There was no discrimination in my home when I was growing up. The men cooked and the women cooked.”

“You know, I thought as the last child I was going to be pampered and when it got to my turn I did everything and my father consistently told me I can achieve anything I put my mind to. Everything I want to do I can do it,” she said.

Describing her father as the first feminist she knew when growing up, the outspoken journalist said she had no idea what her father was doing then but now she can confidently say that he really raised her to break barriers.

As an entertainment prefect of Mfantsiman Girls School, and a Women’s Commissioner at GIJ, she always tried to push that women agenda.

“We were empowered and did everything, we even staged a ‘coup’ in school. You know I was the ringleader for all the ‘coup’. As the ‘coup’ makers we ensured and insisted the right things were done.”

“At GIJ, I was the women commissioner and when I did my Masters in the UK as well I was one of the powerful women on campus by pushing for the women agenda,” she recounted.

So this was what influenced Gifty Anti to start her Standpoint programme, which discusses issues affecting women on Ghana Television.

“So it’s been like that and what really pushed me to start my programme ‘The StandPoint’ was being in the limelight that time and being the youngest person who was on TV doing politics or talking about politics because I used to host ‘The Newspaper Review.’”

“As you know  ‘GTV Breakfast Show’ was the first-ever morning show on TV so people just found it strange and prior to that just a handful of women were into active politics than when it came to the media landscape.

“Everybody was doing that health and entertainment which are very important as well. When I came back from doing my Masters, I started my programme because I wanted people to know that there are great women in Ghana who can speak authoritatively on politics, on economics.”

“When we started I realised that there were underlying factors because it was difficult getting the women to talk about these things and I wondered why.”

According to her, underlying factors such as women who were divorced and not married at all or women with no kids made her change her approach to real empowerment by giving and helping women understand their self-worth.

“So I realised that someway, certain topics women will be like no we don’t want to do it, I don’t want to do that and you go into and you realised because of their background; because they are not married; they don`t have a child because they are divorced;  their husbands will be angry; their family will tell them they are tarnishing their names and so many misconceptions about it.”

“So I  changed my approach to real empowerment, giving and helping them understand their self-worth and letting them know they will be doing something extraordinary if they dare speak up and put their potentials and capabilities out there for people to know that yes they`ve got this, they can do this.”

As a mother of one and married to a chief, Oheneyere, as she is affectionately called in the traditional setting, said she is never shy to reveal her age in order to break that stereotype of always calling women old when they reveal their real age.

“One of the reasons why I openly talk about my age is because I realised that women`s age was used against them. Women were afraid to grow old, women were lying about their ages, women were very reluctant to talk about it or to tell people their age all because they will be called an old lady and all that and so I deliberately made an effort and I made it my agenda to break that stereotype.”

“I wanted people to know that growing old is beautiful. If you lie about your age or if you hide your age it doesn’t mean that you`re not going to grow old, it’s all about you. I’m 51 and God knows I just love it and I just want to know that it’s all about how you manage it like every situation as a woman. It all depends on how you handle it.”

Gifty Anti said she doesn’t let negative comments or attacks affect her at all.

“Sometimes I’ll cry, sometimes I’ll break down but then  I get up and say no way, this is not going to keep me here, I am going to keep going and I do that in every aspect of my life. As I age, even my personal life is growing. When I turned 50, I changed my hairstyle, my dressing and I lost weight. I turn 51, I have cut my hair short with my grey. I’ve changed my dressing.”

Married to Nana Ansah Kwao IV, Chief of Akwamu Adumasa, Aunty Gifty, as she is affectionately called, said she met her husband during one of her interviews on marriage and life on the radio some years ago.

“During one of my interviews on radio, I saw some guy walking at a radio station with some swag with his shorts and so he said ‘Hi’ and he said to me you look more beautiful in person than on TV, apparently he was conning me. I just laughed.”

“We later became friends and of course, he respected the fact that I was in the media before he came, so sometimes when he needs to discuss anything he will send me a message. We dated for a while before we got married.

Combining work and chieftaincy, she said it was very tough considering the fact that she loves what she does but in all, she was grateful to the people of Adumasa for the massive support shown her over the years.

Sending some pieces of advice to the youth, especially young women who look up to her, Gifty Anti believes these young people have got what it takes to change the world.

“You know life is a journey, take your time to enjoy life but don’t forget where you want to get to. Build upon it gradually when the opportunity comes, take care and prepare yourself.”

“One of my favourite quotes says ‘success comes when opportunity meets preparation.’ Prepare, look up to people who are doing what you want to do and think about how you can improve on it and better it. I don’t want people to be like Gifty Anti, I want people to be better than Gifty Anti.

“I don`t want only journalists looking up to me. I want lawyers, I want doctors to pick up that can do spirit, that daring to make a difference in the best of every situation. That spirit of reaching out, having compassion and loving and reaching out to help people,” she admonished.

“I want people to pick up that from me. But I want them to do it in their own way. I want every young lady to know that they are unique in their own way. Don’t follow people, no, be unique, let them say whatever they want to say. One day those same people looked up to me when I wasn’t married. They said a whole lot of things. They said I’m an old lady, I can’t have any children. When I had a child now what do they say now?” She quizzed.

She also touched on how people have now used her as a reference point.

“A crazy friend of mine says that ‘if you look more beautiful than me I’m uglier than you.’ It depends on how you look at it. I`ve got something that you haven`t got. You`ve got beauty, me too I`ve got ugliness.”

“The same person says, be an example even a bad example is still an example you know but be a good example. Just believe in yourself; just know that you can do it. If you decide to be a cleaner the way you go about it will earn you some respect.

“Respect yourself, value yourself,” she added.

DISCLAIMER: The Views, Comments, Opinions, Contributions and Statements made by Readers and Contributors on this platform do not necessarily represent the views or policy of Multimedia Group Limited.
Tags:
Gifty Anti
International Women's Day