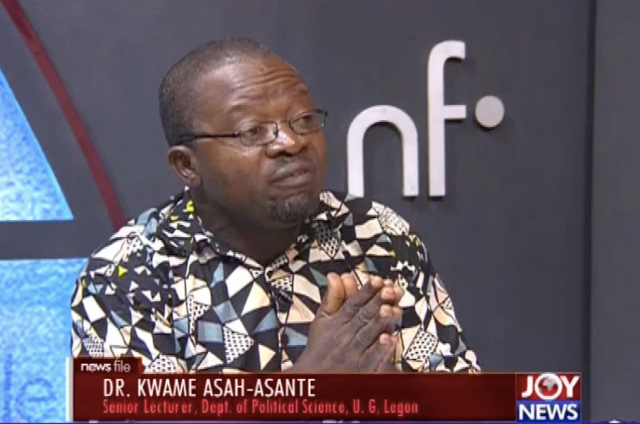 Political Science lecturer at the University of Ghana, Dr Kwame Asah-Asante, has called on the NDC to accept the Electoral Commission’s suggestion to table their proposed electoral reforms at the Inter-Party Advisory Committee (IPAC).

According to him, many of the proposals raised in NDC’s report are really significant issues that need to be deliberated at a proper forum.

Speaking on Top Story, on Tuesday, Dr Asah-Asante said, “some of them [proposals] are very laudable even though I disagree with a few of them. I think that the proper forum for them to make this case is IPAC.”

“Sit down at IPAC and discuss these issues because, if you go through the list, you realise that some of them are real important issues that I believe when it is tabled at the proper forum, you have the stakeholders there who will look at them.”

His comment comes after the NDC sent its proposed electoral reforms to the office of the Electoral Commission’s Chairperson Jean Mensa.

The party has outlined 34 Electoral reforms after it boycotted an Electoral Commission led efforts towards reforms.

The party said it wants the appointment of EC Chairperson to have prior approval of Parliament whilst insisting the voting period of 7 am to 5 pm on Election Day be maintained.

However, the Jean Mensah-led Electoral Commission has directed the opposition National Democratic Congress (NDC) to table its proposed electoral reforms before the Interparty Advisory Committee (IPAC) for dialogue.

Defending their decision, the General Secretary of the NDC, Aseidu Nketia, said, “we have been discussing these proposals at IPAC, but now one of the problems is the IPAC itself.

“The IPAC itself needs to be fixed. So you don’t go discussing a problem in a problematic forum. That is why we have to reach out to other stakeholders.”

However, Dr Asah-Asante believes that with the issues raised by the NDC, the proposal will be well received.

“So, I think they should go to IPAC and table the issue for a broader discussion to be held on the matter,” he added.