Is the lockdown the only science-driven option for Ghana? Gabby wants to know - MyJoyOnline.com

Is the lockdown the only science-driven option for Ghana? Gabby wants to know 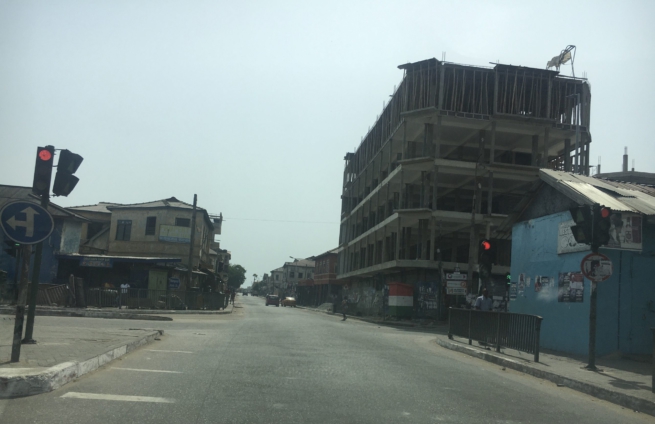 The President was clear in his 7th speech on Covid-19, delivered Sunday. He says, the fact that we are lifting the ban does not mean we are letting our guard down. Stay home unless it is absolutely necessary to step out, he stresses.

He went to great lengths to show that the decision to lift the lockdown was also backed by science and data.

The data shows, and the scientists explain, that the dynamic of the virus in Ghana and much of Africa, so far, appears different from what we are seeing elsewhere.

The mechanisms by which this virus is transmitted is the same everywhere, whether you are in Accra or Madrid —coughing, sneezing, handshaking, being in close contact with an infected person, etc. However, there is evidence across the world that the way it spreads, the speed, pattern and impact of that spread may vary from country to country, community to community.

Yet, those who are convinced that lifting the partial lockdown in Accra and Kumasi now was wrong, may have a point. Only time will tell. But, they will be wrong to think that their opinion is supported by science and data and that of the President not. I will proceed to show why.

The truth is that it is harder to impose a lockdown in a developing (poor) country than in a developed (rich) country. But, the President believes, as he showed three weeks ago, that it is better to lockdown, when in doubt, and use that period to gather a deeper understanding of the situation in order to allow you take a decision, based on the information gathered, on what the next step should be. That is exactly what is happening now in Ghana.

When to come out of a lockdown is also a judgment call based on several other factors but all such factors only come to play when viewed in the light of the science and data available.

It is also important to stress that lockdown is by no means the only effective method of checking the spread of this virus. Some of the countries combating this pandemic more effectively than most countries, are not in a lockdown. They did all the other things we are doing, including aggressive contact tracing and testing and shunned lockdown.

We should be careful about being unduly influenced by imported groupthink. We must develop our own groupthink based on our own circumstances and available scientific evidence.

Our vociferous social media influencers and middle class opinion leaders, especially —those with the eloquence and channels to voice their opinions and the physical and fiscal capacity to endure a lockdown, should please try and be guided more by local evidence, ie from the science, social science and data in Ghana.

In a country like ours where we have high death rates from other illnesses, such as malaria, TB and cholera, and where the impact of poverty causes a lot of avoidable deaths, including at childbirth, a lot more has to be considered in the basket of science and data. But, let’s look at the data here.

Currently, out of the 1,042 confirmed cases in Ghana, only 4 (yes four) are in either critical or moderately ill condition. That is 0.38%! Globally, majority of those infected with covid-19 get a self-limiting infection and will go on to recover.

My prediction is that over the next three weeks alone, we are likely to have over 500 cases of recovered cases in Ghana after the mandatory two successful negative tests.

So far, the transition from mild to severe or critical cases or death in Ghana is not happening anywhere near the rate that we are seeing in the West. We have only 9 deaths so far. Of course, every death matters. But, that is still 0.86% of all confirmed cases. Globally, according to various credible trackers, about 10% of cases require intensive care unit admission and 6.4% of people confirmed to be infected have now died globally. California alone, for example, has some 1,177 deaths. So far, the trend in Ghana is not following the pattern we are seeing in the West, for example.

Our population is also much younger than that of the West and the scientists believe this counts. Over 95% of deaths caused by Coronavirus in Europe affected those over 60 years, with more than 50% of all deaths being people over 80.

Furthermore, the warmer climate may also be helping us, (if not the years of chloroquine our bodies have endured!) because the rate of infection among those known to have been in contact with infected persons (and yet were not infected) seems much lower than what we are seeing in the West.

The point in all this, is not to be complacent. In any event, not many leaders of the world has taken the kinds of timely, bold and decisive initiatives that President Akufo-Addo has taken since March to combat this virus. It is about how one chooses to read the data. The numbers may frighten you, compared to where we knew we were five weeks ago, but the numbers represent more than panic.

For example, 49,699 people have been tested directly through contact tracing. Only 544 (1.09%) of them tested positive. Contact tracing simply refers to people who had been in contact with persons carrying this highly infectious Coronavirus.

Compare that to the infected persons who brought it from abroad. Out of 2,022 who were quarantined, 115 (5.69%) tested positive.

Now, one other basic indicator of actual cases may come from those captured under the headline “routine surveillance” — meaning those who have the symptoms and go to the hospital, get tested and come out positive. Out of 16,870 of them tested, 383 (2.27%) were positive. That puts the total percentage of the 68,591 tested and registering positive results at 1.52% or 1,042.

We can all speculate that the actual numbers of infected persons out there in Ghana and undetected could be as high as 30,000 or even higher. But what we can’t speculate but can tell for a fact is that there is no evidence as at yet of a spike in sick people showing up in our health facilities nationwide with symptoms. That must count for something. Surely?

The data has been quite robust over the last three weeks. 98.5% of people tested continue to be negative. That must count for something. And, it is all about science and data.

And, when you have such numbers you must weigh your options with both common sense and analytics. The same way the decision to lockdown and the nature of that partial lockdown was based on epidemiological and social considerations, the decision to lift it is also based on both.

Science also includes social science. Are the 1,042 confirmed cases we have now because of the lockdown? Will they have been higher or lower without the lockdown?

If these answers are not known for certain then do we continue letting ordinary people, which means the vast majority of our city dwellers, suffer the impact of the lockdown when the only empirical evidence we have so far is that the rate of infection through contacts with infected persons is, as at now, nowhere near as high as elsewhere?

Moreover, should lockdown and the consequences of it be our preferred option when less than 0.5% of those infected get into critical condition as opposed to 4-6% globally? Lockdown may well be once again a preferred option in the future. But, right now, the evidence scantily supports it when probed.

The only other thing we know for sure for now is that we detected most of the infected cases because of the aggressive tracing and testing. The trend so far is that for every 10,000 of suspected cases tested, about 1.5% come out positive.

Ghana has an aggressive programme of contact tracing that has not started in even many advanced countries, where you have to first fall ill to qualify to be tested. The decision by the President to get even more aggressive with testing should put us in an even better position in the next three weeks to weigh the options further.

So far, the data gathered gives us confidence that community spread is low. Ghana leads Africa in testing per capita and Ghana may very well also lead Africa in showing that besides lockdown, we can still check the spread successfully with the remaining measures, backed by greater self-discipline and self-control.

We must not be shy in asking the question: should our policy on lockdown be driven largely by the 1.5% who have tested positive? This may require a common sense answer.

Will another two or three weeks have made any difference to the trend analysis? Certainly, for those enduring the crude and naked direct impact of the lockdown, which may not necessarily be you and I (since we may be able to afford the inconvenience and the struggle), but, for them, everyday spent under a lockdown may be a struggle for survival and against another disease.

In any case, we are even going to ramp up testing and maintain border closures, social distancing, and extensively wear masks, etc.

When all is said and done, the President did say, “Should there be an unexpected outburst in infections within a community, I have put the health workers and the security services, including the Police Service and the Armed Forces, on standby, to co-ordinate a rapid response of human and logistical resources, if necessary, to cordon, impose a curfew, trace, test and treat infected persons in the affected community.”

He says it all the time, the situation is constantly under review, adding as he did this time, he won’t be afraid to even impose a curfew if that is what will be required later.

Nana Addo has done his bit. You do your bit. Wear a mask. Work from home if you don’t have to show up at work to do your work. Be a responsible citizen and not just a responsive critic. Stay well!