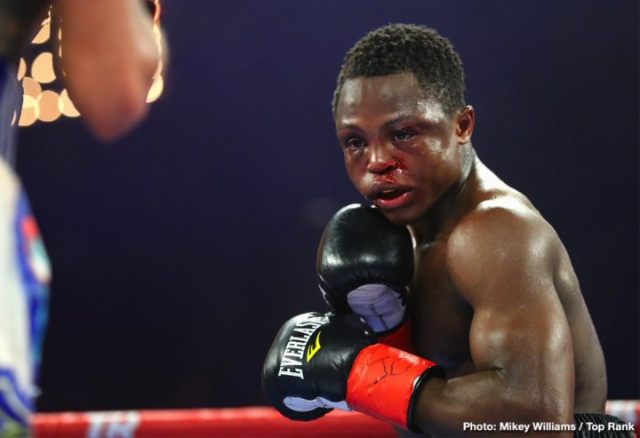 No one goes to war for a defeat. Not even the weakest.  To some, it is a statement, to others; it’s a real determination for dominance and power. In all these, what is constant is either a win or a loss. It's always a win-lose situation. On a few occasions, a draw, like the recent Furry and Deontay Wilder heavyweight battle or the China-US trade war, and that of the modern US Russia global politics.  But even that, a winner will eventually emerge in the nearest future someway somehow with good preparation, tactics and strategic direction. Isaac Dogboe's defeat at the famous Madison Square Garden was actually a painful one but still serves as a clarion call and a lesson to all of us on the path to success and most importantly to people who have tasted success at the top.

Permit me to set the records straight before I continue. It will only take feeble minds to think, that's the end of the young celebrated boxer, and also make a mistake to underrate the great potentials he has in the arena of boxing.

I will reiterate that Isaac Dogboe is not only a boxer but an emerging brand and a true pan Africanist in the world.  What is critical is the price he needs to pay for the prizes he wants in life and of course, defeat is one of them but for sure, he will overcome and emerge stronger.  This is just one phase of a booming and successful career ahead of this young man. He will not only rise again but with higher grace and energy. This is certain.  It is written, ”those who know their God shall renew their strength".   We must understand that there is no renewal of strength without an encounter with a weakness, failure or a fall.

The fundamental lessons we need to appreciate here are :

1. it’s not easy in the first place to get to the top. But it's equally noteworthy that, getting to the top is achievable through grace, hard work and determination. The number of people who have tried on countless occasions to get to the top without success is unimaginable.

2. Isaac’s defeat in this particular fight has really brought in a new level of illumination for him as a person, the team and the nation to understand many issues including having a clear picture of those who truly love him and who wish him well. Less we forget, " Rejoice not against me, O mine enemy: when I fall, I shall arise; when I sit in darkness, the LORD shall be a light unto me. Micah 7:8. Isaac will rise again to the glory of God, his beloved people of Ghana and African at large.

3. Another lesson worth noting is, after achieving the first step, (getting to the top), what is most difficult is retention and sustenance. Many people underestimate the level of effort and investment it takes for champions to remain competitive at the global front. Irrespective of where you find yourself, it's imperative to underscore the fact that, praises must be given to those achievers who have demonstrated courage, tenacity, commitment and gravitas to dream and stage progressive battles in any endeavour, no matter the size and the outcome.  The lost at times is glorious thereof though painful. It's also key in the case of Isaac, for us to acknowledge that he has defended his title victoriously with Otaki, with an incredible performance after defeating Jersey Magdaleno in April this year.

This loss could be likened to the 2016 general election in Ghana between the ruling National Democratic Congress, and the then opposition, New Patriotic Party, NPP. NDC was in power just like Isaac with the WBO Super bantamweight title.  What's very common is underestimating the strength and preparedness of the opposition.  The Mexican fighter like the NPP at the time had a greater hunger with thorough preparations and contingency plan that took the nation by surprise, but the young Dogboe somehow depended on the existing skills set and strength to uproot the hard rock Emmanuel Navarrete from his glorious but humble feat.  Whilst Isaac was aware that he was the force to reckon with in this battle, he fell short of the adequate preparations needed to truly uproot and sustain his belt – a situation which the team is fully aware of.

I have no single doubt about the prowess of Isaac. He has what it takes to withstand his opponent and defeat him, but for one or two notable reasons: The lack of effective training and adequate preparation to the fight borne out of certain constraints; underestimation of the opponent based on his previous performance and his buffer stock of energy. I am not surprised he fought gallantly till the end. The rest will be looked into on different occasions. How I wish I could critically enumerate all the reasons for the excruciating defeat but the rules of competitive warfare don't allow every micro assessment for public consumption because your competitors are watching and listening.

For those who assumed that this is the end of Isaac’s career and that he will never bounce back, it's like making an assumption that the NDC will never come back to power based on 2016 general election's result or the APC and PDP situation in Nigeria. No!!! That's not the case. The key hashtags would be: #a little more effort, #readiness to appreciate the critical setbacks #structural adaptation, #good timing and #change in the game plan. Above all, God’s supreme plan

I know people of Ghana will not make that mistake to believe that Isaac will not rise again.  The Ghanaian spirit and for that matter, the African DNA is that of resilience and determination.

I believe Isaac shall rise again.  I believe in the unflinching support of Ghana, the management and his loved ones across the globe.
God bless our homeland Ghana and make our nation great and strong.