Coalition of Muslim Organisations (COMOG), an Islamic group, has called on government to withdraw its involvement in the organisation of religious programs and projects because Ghana is a secular state.

The group has joined sections of the public opposing the government's involvement in the construction of a National Cathedral and also added the organisation of the annul Islamic pilgrimage to Mecca in Saudi Arabia.

The group of muslims said it found the use of government resources in organising Hajj as well as building a National Cathedral "unjustified".

“COMOG has no objection to the building of a cathedral. Christians in Ghana are capable of building a cathedral without government's involvement or sponsorship. Just as the Government of Ghana has not been involved in the construction of religious edifices for Muslims, Traditionalists, Hindus etc., it should not be involved in the efforts by Christians to build themselves a cathedral,” the organisation said in a press statement, Tuesday.

The organisation has also criticised the government for proceeding with preparations to put up the cathedral before a suit challenging the process at the Supreme Court is heard.

According to COMOG, the haste by the government to construct the massive edifice, even before the Supreme Court pronounces judgement on the suit “represents an utter misplacement of our priorities as a nation.” 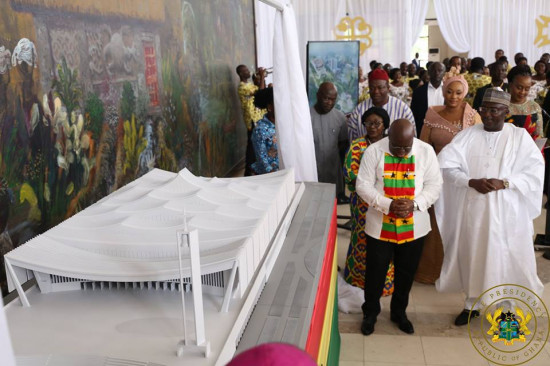 President Addo Dankwa Akufo-Addo’s project to build a National Cathedral has been hailed by some religious groups and a section of the public, however, it seems to have ruffled the feathers of a few other interest groups.

Photo: The President has said the cathedral will be a thanksgiving edifice to God

The current major opposition to the construction of the landmark that was designed by the Ghanaian architect David Adjaye has been its planned location.

The 14 acres that the magnificent building will occupy is partly the location of the residence of some Appeal Court Judges and other important state institutions.

The cathedral will be an interdenominational Christian cathedral and will a thanksgiving edifice to God as part of Ghana's 60th-anniversary celebrations, the President has said.

A private citizen, James Bomfeh, is also in court to challenge the constitutionality of state involvement in the erection of the National Cathedral and other religious activities like the organisation of the Hajj for Ghanaian Muslims.

According to Mr Bomfeh, a member of the Convention People’s Party (CPP), the framers of the Constitution strived at fairness for every individual’s religious belief when they stated that the state must leave religious matters to the individual.

The Supreme Court is yet to pronounce judgement on the matter, but the government has already sent quit orders to residents whose homes and properties are situated on the stretch of prime land to be used for the cathedral.

COMOG also said in the release that in a secular nation with multiple faiths like Ghana the promotion of Islam and Christianity constitutes an affront to the letter and spirit of the Constitution of Ghana which bars the state from any promotion or sponsorship of religious activities.

It said the decision of the government to destroy state buildings including homes housing judges of the Appeals Court, the Scholarship Secretariat, the Passport Office and the Judicial Training Institute, some of which were built only five years ago, to make way for the construction of a private religious edifice constitutes a wanton destruction of state property.

“We join many well-meaning Ghanaians including Members of Parliament, members of the Legal fraternity and some of the Judges to be affected by this destruction, in calling for the relocation of the cathedral to another part of Ghana where it can be constructed at little cost to the state,” the release signed by its National President, Sheik Dr Al- Hussien Zakaria, stated.

COMOG has also called on the Chief Justice, Sophia Akuffo, to immediately empanel judges of the Supreme Court to hear the case brought to it against the government's involvement in the Hajj and the construction of the cathedral.

“At the same time, we call on President Nana Addo Dankwa Akuffo-Addo and the promoters of the building of the cathedral to halt the planned demolition exercise and any other activities that will cause permanent damage to or loss of state property until the slit at the Supreme Court is heard. The government should also return the mandate for the damn organisation of Hajj into the hands of Ghanaian Muslims,” the statement urged.

Furthermore, the Islamic organisation wants the government to push for the auditing of the accounts of the current and past Hajj Boards.

“Individuals found culpable in the misappropriation of monies paid by Ghanaian Muslims to Hajj Boards over the years must be made to face justice. We find it unjustifiable that rather than demanding justice for Muslims defrauded by individuals over the years, the governments have chosen to cover up their activities by claiming to pay for monies lost over the years,” COMOG stated.

“The government must provide evidence of the sponsorship it has given to the Hajj Board and Muttims to perform Hajj during the past two years as well as indicate the source of such funds. We find it wrong and unjustifiable that the Government of Ghana should be involved in using resources, regardless of their sources, to sponsor Muslims for a pilgrimage that is reserved solely to Muslims who are financially capable of undertaking it if that is the case. Such funds could have been used for pressing developmental projects for the benefit of Ghanaians of all faiths,” the COMOG stated said.