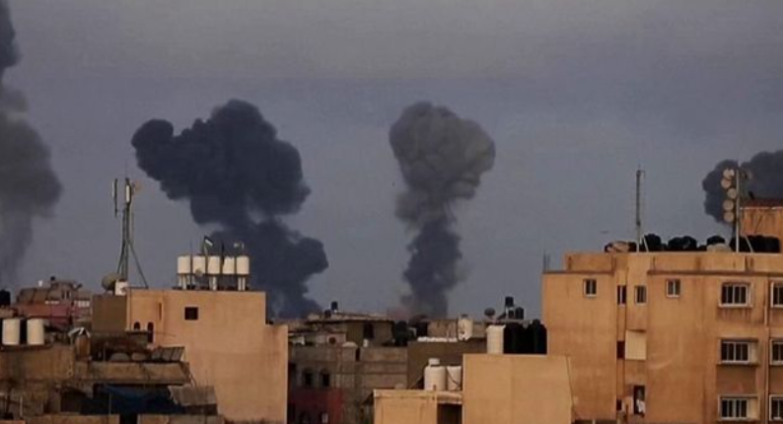 Hamas has launched a rocket attack on Tel Aviv, with a direct hit on a building leaving at least one person dead, Israeli media reports.

Residents ran for shelter as hundreds of rockets exploded and warning sirens blared throughout Tel Aviv.

Hamas said in a statement it had fired 130 rockets towards the city and its suburbs as weeks of tensions with Israel escalated into some of the most violent scenes since the war of 2014.

Israel’s Iron Dome defence system was launched in a bid to intercept the Hamas rockets.

The targeted attack on the building took place in the suburb of Holon, killing a 50-year-old Israeli woman, according to local medics.

The energy pipeline connecting the cities of Eilat and Ashkelon was also hit by the rocket strikes, Israel’s Channel 12 TV reported.

Two Israeli women – one elderly and her carer – had already been confirmed dead in Hamas airstrikes on houses in the city of Ashkelon on Tuesday.

The deaths came after Israeli fighter jets, attack helicopters and drones hit more than 130 “Hamas military targets” inside Gaza, including the home of a Hamas commander, according to the Israeli military.

Twenty-seven Palestinians, including nine children, died as a result, with a 13-storey building collapsing after another nearby strike.

The attacks were in retaliation to a barrage of rockets, including six that landed close to Jerusalem, which were fired into Israel from Gaza on Monday.

In a video statement, he said: “At the conclusion of a situational assessment, it was decided that both the might of the attacks and the frequency of the attacks will be increased.”

Those comments echoed his earlier threat that the Hamas attacks had “crossed a red line” and Israel “will respond very forcefully”.

“We will not tolerate attacks on our territory, our capital, our citizens and our soldiers. Whoever strikes us will pay a heavy price,” he said.

Hamas said on Tuesday that it will “not stop its resistance action as long as the Israeli occupation continues its aggression against the Palestinians”.

The latest violence comes amid soaring tensions in Jerusalem and days of fighting at an important mosque in the holy city.

Hundreds of Palestinians were hurt in just 24 hours during clashes with Israeli security forces in the courtyard outside the Al Aqsa mosque and in the narrow streets of the old city.

Hamas had given the Israeli government an ultimatum to withdraw its forces from the mosque area, release all Palestinians detained over the course of the day and remove Jewish settlers from the Sheikh Jarrah neighbourhood of East Jerusalem.

The militant group said it would retaliate at 6pm on Monday if the demands were not met.

At just after 6pm explosions were heard in Jerusalem as the Hamas rockets landed eight miles to the west of the city.

DISCLAIMER: The Views, Comments, Opinions, Contributions and Statements made by Readers and Contributors on this platform do not necessarily represent the views or policy of Multimedia Group Limited.
Tags:
Hamas
Israel
Tel Aviv