‘I’ve been hearing voices’ – Father who mutilated son by flogging 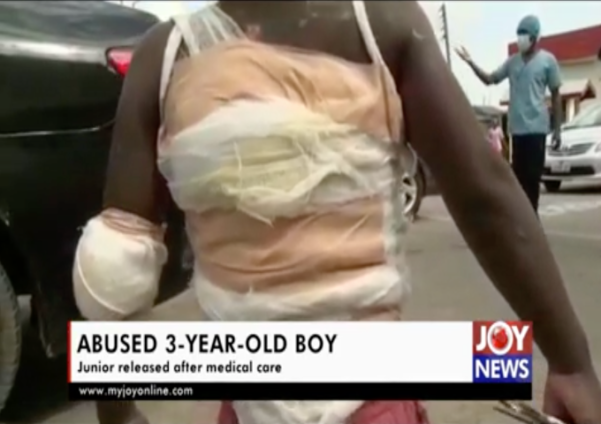 A 25-year-old father who flogged his three-year-old son leading to severe injuries has been telling Luv News he has suffered series of mental episodes for 13 years.

This was after he was slapped with a two-year-old jail term by a Kumasi Circuit Court today for assault and causing harm.

The court Presided over by Her Honor Patricia Amponsah also ordered Ebenezer Osei Bonsu to sign a bond of good behavior for four years, a default of which would see him in jail for 48 months.

After hearing the verdict, Ebenezer Osei Bonsu said he wasn’t himself and he is now a changed person.

Ebenezer Osei Bonsu was slapped with a two-year- jail term for flogging his three-year-old son leading to severe injuries.

Outside the court the little boy repeatedly called for his father to be jailed and punished similarly to how he was treated.

“Are they going to put him in jail?” He queried. I want him to be jailed. They should give him an injection and jail him. They should jail him,” he kept saying in Twi.

In an exclusive interview with Luv News, the convict, amidst tears apologized and revealed he has been living with mental health challenges for 13 years.

He cried: “I told this lady about what I am going through. I regret my actions. I hear so many voices, and then I have been through so much pain for 12 good years. So when it reflects or occurs to me, I become disturbed, distracted.”

He says he’s been hearing voices urging him to end it all.

“It occurs to me that it is over. You know, stop going, stop hurting, end it, end your life. I sometime become frustrated. I don’t know what works me.”

His lawyer, Amofa Koduah told Luv News he wanted his client to be cautioned and discharged.

“We were only praying that the judge will have pity on us and also take into consideration the fact that, we still need to cater for the child,” he told Luv News. “So we are grateful to the court for dealing supposedly leniently with us. We would have wanted that he be cautioned and bonded to be of good behavior, but causing harm, we know the implications, so if the lady judge has dealt that leniently like this with us, we will only be grateful to God that he answered our prayers.”

Mother of the victim accepted the verdict of the court.