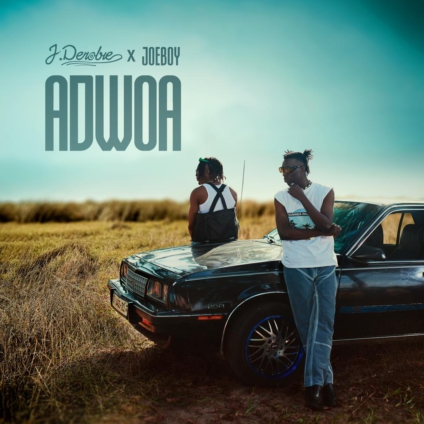 For many years two West African music powerhouses, Ghana and Nigeria, have championed some of the best music collaborations in Africa despite the diversity in musical style.

The pair who double as label mates have a history of musical collaboration dating back to 2021 when J. Derobie contributed to writing Joeboy’s song Sip (Alcohol), an infectious tune that became an instant hit and stormed various charts.

After months of speculation from music fans, the two have satisfied the curiosity of fans with this collaboration.

This time, it is the Ghanaian who enlists the assistance of his empawa colleague to lace the track with his alluring sensuous vocals on the song titled ‘Adwoa‘, the third single off his upcoming debut album.

Joeboy leads with his husky vocals while J. Derobie spiced up with his dancehall-influenced style which suddenly makes the song very much fun to enjoy.

Collectively, the award-winning musicians conveyed the universal feeling of love.

Ato Me So’ and ‘Bruk off’ are two of the singles previously released by J.Derobie ahead of the album that will be available on December 8 2022 on all music streaming stores.

There’s no doubt that fans would anticipate a high-standard album from the “Ginger Me” crooner, after having done a great job with his Nungua Diaries EP.

DISCLAIMER: The Views, Comments, Opinions, Contributions and Statements made by Readers and Contributors on this platform do not necessarily represent the views or policy of Multimedia Group Limited.
Tags:
Adwoa
J.Derobie
Joeboy