Japan demolition proves interest has never been in Ghana football 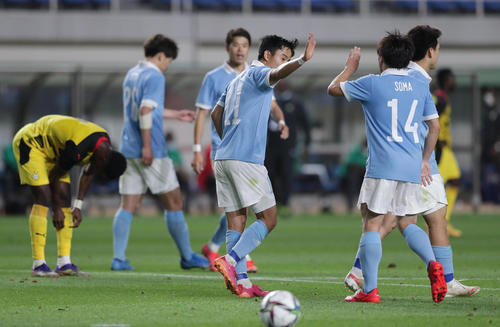 On Saturday, Japan’s U24 team scored for fun in a one-sided friendly game against Ghana’s U24.

Results have never really been the focus, especially, in developmental football.

However, no other metric on the day showed that Ghana could compete.

The Ghana Football Association weeks prior had announced the Black Meteors would be facing Japan twice in friendly games.

So how does Ghana leave a friendly game, which the country spent nothing on, in a deficit.

It’s just a friendly after all, but for a football association preaching “Bring Back the Love”, one would think the interest of the fans will be at heart.

There are three stages in this Ghana v Japan episode, where the Ghana Football Association (GFA) could have considered the interest of Ghana football.

National team call-ups are a big deal when it comes to Ghana football.

As expected, there are always opposing views no matter which players are selected.

However, eye brows were raised when the Salifu Ibrahim, Imoro Ibrahim and a few other players weren’t included in the initial list.

This time, there was a unified voice making a case for the inclusion of Salifu especially.

Many felt he had been the best player in the Ghana Premier League in the weeks prior to the call-up and deserved a spot.

Salifu, the player who has the most Man of the Match awards in the Ghana Premier League, was added to the squad just 10 hours later.

Good news? Or maybe not. Adding the best performing player in our league hours after an initially call-up posed red flags.

It showed that Ghana football was not at the interest when the list was compiled.

A country who cares about their people will put out its best players to compete and most importantly win.

Failing to call your best players was a form of sabotage because essentially, the team wasn’t given the best chance to win.

Amending a call-up list without any injuries only showed an admittance of guilt.

The primary focus of the GFA was to complete a Ghana league for the first time in about four years.

This season looks on course to be completed.

However, it’s a bit strange the GFA chose a time when the league was gaining its most talkability to play an irrelevant friendly.

Irrelevant because from the point of view of Ghanaians this game isn’t needed.

The GFA stated the friendly game was to help the team prepare for the All African Games which is in 2023.

If you asked a Ghanaian whether they would love the country to put their best foot forward in a friendly game for a competition two years away, or for the conclusion of the local league, I’m sure you’d have a unanimous decision.

This weekend sees four derbies unfold which affects different sections of the league table from the title race to the relegation battle.

Why won’t the focus be on that? Players from some of these clubs were called. Some teams called back their players whilst some didn’t.

Isn’t that reducing the level of competition essentially?

Karela United will be without their top striker Diawisie Taylor for the Nzema derby against Medeama.

Asante Kotoko will be without left back Imoro Ibrahim for the derby against AshantiGold.

Jonah Attuquaye who’s been very crucial for Legon Cities in their battle for survival will also be out in a key game against Inter Allies.

The list goes on with some Premier League players currently in Japan.

For the first time in a while, Ghanaians are gaining interest in the local league, why would you choose to compromise it by playing an irrelevant friendly?

The last stage the GFA could have pulled the plug on this game was when the team arrived.

Karela striker Taylor tested negative for Covid—19 in Ghana, but had to isolate after he tested positive upon arriving in Japan.

The player is in good health but there is a chance the player who has traveled and mingled with the team could put others at risk.

Traveling to Japan in the first place wasn’t the best idea.

CNN reported a minor doctors’ group are calling for the Olympic Games to be canceled.

The reason being that the influx of people will exacerbate an already worsening outbreak in Japan.

So once again, was the safety of these players prioritized before honoring this friendly?

What happens to Taylor now who might have to isolate for longer. How will that affect his season with Karela?

Playing friendly games can be good, but the timing wasn’t optimal.

The actions of the GFA in these three stages perhaps suggest that Ghanaian football interest wasn’t the focus.

Japan claim they chose to play Ghana because our style is similar to South Africa who they’ll play in the upcoming Olympic Games.

Politely saying no to Japan because of an ongoing league wouldn’t throw any tantrum and damage any relationships.

Yes it’ll be a hard decision, but it is these hard decisions that prove that are you determined to “bring back the love”.

DISCLAIMER: The Views, Comments, Opinions, Contributions and Statements made by Readers and Contributors on this platform do not necessarily represent the views or policy of Multimedia Group Limited.
Tags:
Black Meteors
Ghana Football Association
Ghana Premier League
Japan
Owuraku Ampofo