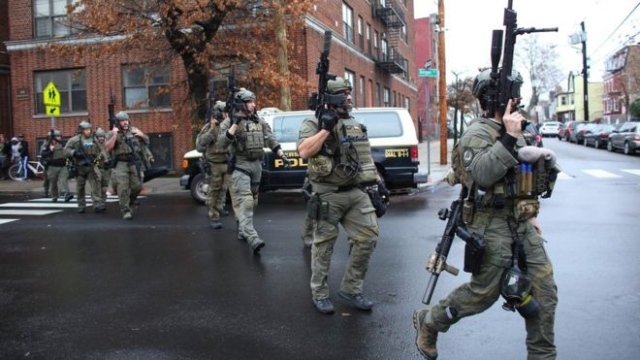 A police officer and at least five other people have died in a series of gun battles in Jersey City, in the US state of New Jersey.

Two other police officers were also wounded during the incident, which culminated in a shootout after two gunmen barricaded themselves in a shop.

A motive for the incident has not yet been established. Authorities say they do not believe it was a terror attack.

Authorities identified the police officer who died as Joseph Seals, 39, who was part of a state-wide programme to confiscate illegal weaponry. 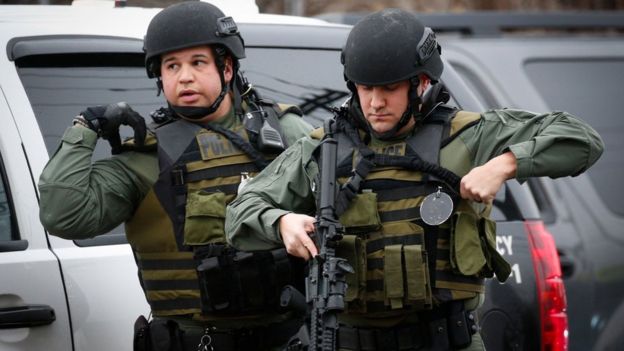 Mr Kelly said violence first erupted at a local cemetery just after 12:00 local time (17:00 GMT) on Tuesday. Local media reported that confrontation between police and the suspects was linked to a murder investigation, but this has not been confirmed by authorities.

Police at the scene immediately came under “high-powered rifle fire,” Mr Kelly told reporters, and it is believed that Mr Seals was killed while approaching the two suspects, who have not been publicly identified.

The pair fled the scene in a van and took shelter in a kosher supermarket where they held off armed police and federal officials for four hours, shooting off hundreds of rounds of ammunition.

Investigators believe the two gunmen killed three people in the shop before they were shot dead. At least one survivor from the shop is being treated for injuries. 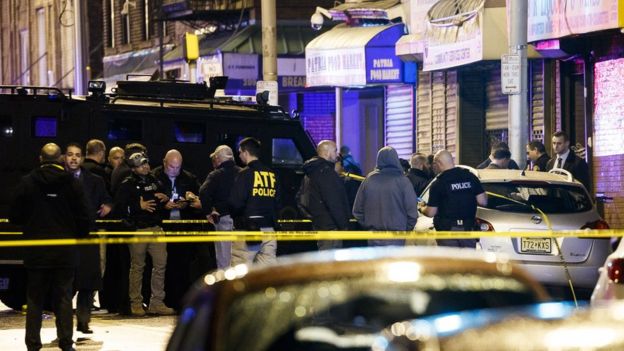 Mr Kelly said investigators also believe the suspects’ van contained an “incendiary device” which was removed and taken away for examination by police disposal specialists.

“Based on what we now know, there are no ongoing threats to public safety that have any connections to today’s events,” New Jersey Governor Phil Murphy told reporters at a separate news conference.

“This has been an incredibly tough day for Jersey City and the entire state of New Jersey,” he added.