‘JM we are sorry, we need you back’ – Nurses plead with Mahama 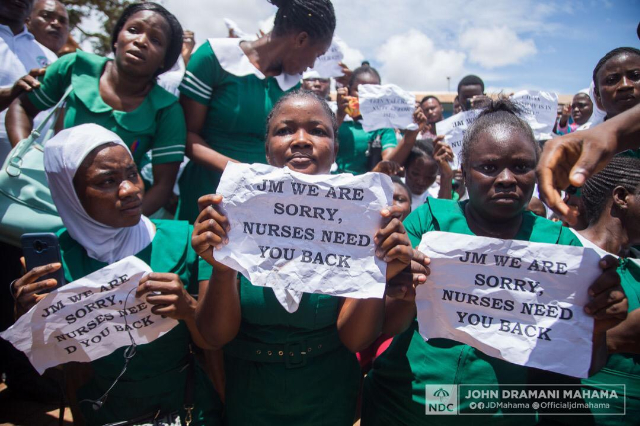 Former President John Mahama has gone on a tour of Nalerigu in the North East Region where he met trainee nurses from the Nursing and Midwifery Training School.

The students were seen in pictures posted by Mr Mahama on his Facebook page, hoisting placards; most of them which read “JM, we are sorry. Nurses need you back”.

Trainee nurses threatened to vote against the then President John Mahama before the 2016 general elections when his administration withdrew their allowances.

The administration justified the decision then that it would help improve infrastructure and also increase enrollment.

However, the then opposition leader, Nana Akufo-Addo promised to restore the allowances when voted into office.

Upon his ascent to office, however, the Akufo-Addo administration has been criticised for delays in paying the allowances.

The Health Minister, Kwaku Agyeman Manu has recently that the monies have been paid and all arrears have been cleared.

Below are pictures from Mahama’s tour