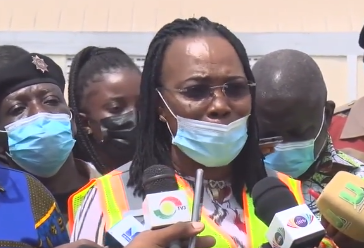 The Chief Executive of the Accra Metropolitan Assembly (AMA), is urging Ghanaians to collaborate with the government to curb flooding in the capital city, Accra.

Madam Elizabeth Sackey said there must be a non-partisan approach to address the perennial flooding in the city.

After, several hours of downpours in Accra last Saturday and Monday, parts of the capital city were submerged, destroying property and roads.

There have been efforts to permanently address flooding of the major drains at Circle and Alajo, but the drains get chocked again after they are dredged.

But the Accra Mayor is of the view that the issue can only be won with a concerted effort.

“The efforts by the government to curb flooding, especially in this city, can only be fruitful when we collaborate with it. Just as we joined hands, devoid of partisanship, to curb the spread of Covid-19 in the country, we can fight flooding if we put our minds to it.”

“Let’s consolidate the government’s efforts by being responsible, we can’t for instance continue to dump refuse into drains. We can’t fight flooding with this attitude.”

She made the comments in a media engagement after visiting some affected areas.

The government has disclosed that it has already spent GH₵450 million to curtail the flooding menace.

A revelation some Ghanaians have expressed their dissatisfaction with.

However, President Akufo-Addo, speaking at the commissioning of an IHC BEAVER 50 dredging and marine equipment at Adjei Kojo, claimed that the GH₵450 million his government invested in curbing the menace of flooding in the country has reduced the impact of the menace in the country.

“I did raise concerns at the beginning of my address about the flooding situation in Accra. The government, since 2017 has spent some 450million cedis on the flood control programme which has resulted in the reduced incidence of flooding in the major flood-prone areas in Accra.”