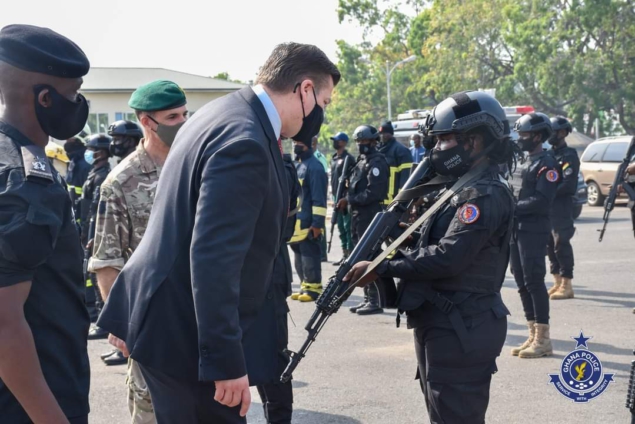 A joint simulation exercise was held in Accra in honour of the United Kingdom’s Minister of State for Armed Forces James Heappey.

Mr Heapey who is on a visit to Ghana was accompanied by the UK High Commissioner to Ghana, Iain Walker and the Defense Advisor Alastair Mckechnie.

They were taken through how effectively the Police-led inter-agency team is using the UK sponsored mobile training equipment, blank armour, and simulation improvised explosive devices (IEDs).

The Minister expressed excitement in the existing partnership between UK and Ghana.

He also said he could see how training arranged between the two countries on countering terrorism and extremism has equipped the personnel and would help security in general.

“No matter how the plan is, it depends on how you execute it on the ground”, he added.

The visiting team was received by a team of Ghanaian Officers from the various agencies, led by COP Mr George Alex Mensah, Director-General Services who represented the Inspector-General of Police on the occasion. COP Mensah expressed gratitude to the UK for the support in the security sector throughout the years.

DISCLAIMER: The Views, Comments, Opinions, Contributions and Statements made by Readers and Contributors on this platform do not necessarily represent the views or policy of Multimedia Group Limited.
Tags:
James Heappey
Police Headquarters Accra
UK Minister for Armed Forces