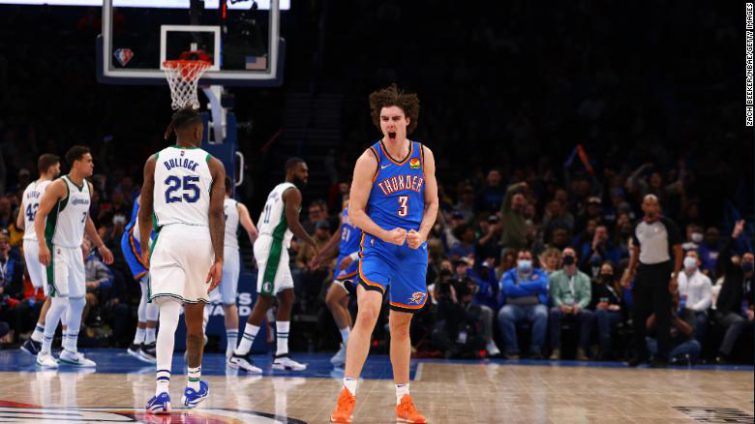 Giddey celebrates during Oklahoma City's game against the Mavericks.

Oklahoma City Thunder guard Josh Giddey made NBA history on Sunday as he became the youngest player ever to record a triple-double.

Ball was aged 19 years old and 140 days when he achieved the feat in January last year.

Australian Giddey, an NBA rookie who was the sixth pick in the 2021 NBA draft, returned to action in Oklahoma City’s 95-86 loss to Dallas having missed three games while in the NBA’s Covid-19 protocols.

As I said, if I had zero-zero-zero and we win, I’m more happy than if I have a triple-double and we lose. It’s always been that way for me, always will be, but it’s a cool milestone.”

Giddey’s 14 assists were also the most by a rookie in OKC’s history.

Luka Doncic returned from a 10-game, 23-day absence and recorded 14 points, 10 assists and nine rebounds for Dallas having been out of action with an ankle injury and then entering the league’s Covid-19 protocols.

“Weird feeling, but I’m just really happy to be back,” said Doncic.

“My chest was burning. I think slowly it’s going to come back. When I shot, the feeling was weird. I didn’t know if it was going to go in or out. There was one shot that feels amazing, I said: ‘You shot it great and it’s going to go in,’ and it was an air ball.”

Dallas built a 12-point halftime lead in Sunday’s game, although Oklahoma rallied in the third and fourth quarters and cut the deficit to four with 41 seconds left on the clock.

However, Maxi Kleber’s three pointer in the closing moments helped to secure the win for Dallas, who moved to 18-18 on the season.

DISCLAIMER: The Views, Comments, Opinions, Contributions and Statements made by Readers and Contributors on this platform do not necessarily represent the views or policy of Multimedia Group Limited.
Tags:
Josh Giddey
NBA
Oklahoma City Thunder