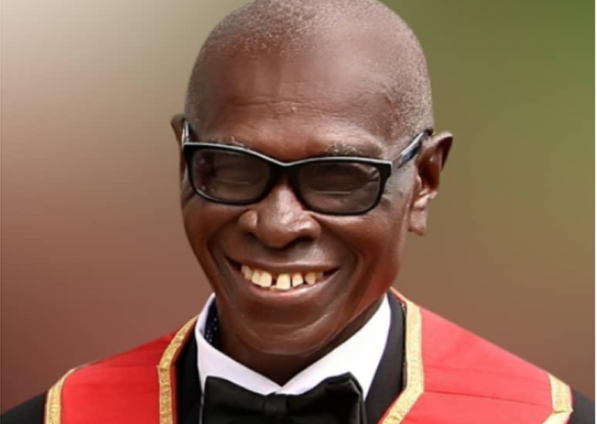 He is reported to have died on October 11 at the Maritime Hospital in Tema.

Taking to Facebook to announce the news, Doreen Andoh shared a photo of the funeral arrangement.

“May the good Lord rest your gentle soul,” she wrote.

According to her post, the family of Mr Andoh will hold a funeral service at the Our Lady Of Mercy Catholic Church (Olam), Community 1, Tema on November 7.

The service will be followed by a Thanksgiving Service.

Wilfrid Kobina Mensa Andoh was born on April 1, 1941, to the late Jacobs Bartels Kweku Andoh, a renowned Accountant, and Auditor who worked with U.A.C., and the late Elizabeth Esi Andoh (Nee Kinful) both of Elmina.

Wilfrid Andoh was born at Palladium in Accra.  He started school at age 5, a year earlier than the usual school age because he followed his aunt, Mrs. Anna Yankah, a Catholic School Teacher to school.

It was noticed that he was very attentive and understood what was being taught so he was allowed to join the class.

Opia Mensa was the 10th born.  He had seven brothers and one sister.

His father did not allow him to go to St. Augustine’s because it was a boarding school and he had his other siblings as well as nephews and nieces to take care of.

He passed his Ordinary Level (O’ Level) with good grades and proceeded to KNUST for the pre University access course which he once again sailed through easily and was admitted to the Department of Pharmacy to pursue a degree in Pharmacy.

He completed successfully with a Bachelor of Pharmacy (B Pharm).

He was posted to Korle Bu for his internship and subsequently posted to Tema Polyclinic where he worked for a number of years.

He moved on to work with Lever Brothers Ghana Limited (now Unilever) where he performed creditably and was sent to Sweden and Norway to pursue a post-graduate course in Industrial Pharmacy.

Wilfrid had a short stint at Johnson Wax before going into private practice with a colleague and established  (Ansong and Andoh) A & A Pharmacy in Dansoman, where he worked for several years. He then worked in another Pharmacy in Prampram.

He joined Tobinco Pharmacy and later TENASA Pharmacy.  He was a very sociable and peace-loving man who was often called upon to settle disagreements.

He was also President of the Zone Four Welfare Association (ZOFWA) in his community eleven neighbourhood. His leadership brought the community very close together and they are still a close-knit community.

He was a staunch Catholic who hardly missed his Sunday early morning mass.  He was invited to Parish Council of Our Lady of Mercy Catholic Church in the mid-1980s and somewhere along the line he was made the Parish Pastoral Council President (Chairperson) from 1987-1989.

During his Chairmanship, he supervised the successful first-ever Open Air Priestly Ordination at the Akodjo Park opposite Our Lady of Mercy Parish.

He also joined the Knights of Marshal and rose through the ranks to finally become a Deputy Supreme Knight.

He is survived by his wife Gladys Andoh, three children Yvonne, Doreen, and Kobby, three grandchildren, a sister Phyllis Ofosu-Amaah, brother Robert Andoh and a host of cousins, nephews, nieces, and in-laws.

DISCLAIMER: The Views, Comments, Opinions, Contributions and Statements made by Readers and Contributors on this platform do not necessarily represent the views or policy of Multimedia Group Limited.
Tags:
Doreen Andoh
Wilfrid Kobina Mensa Andoh