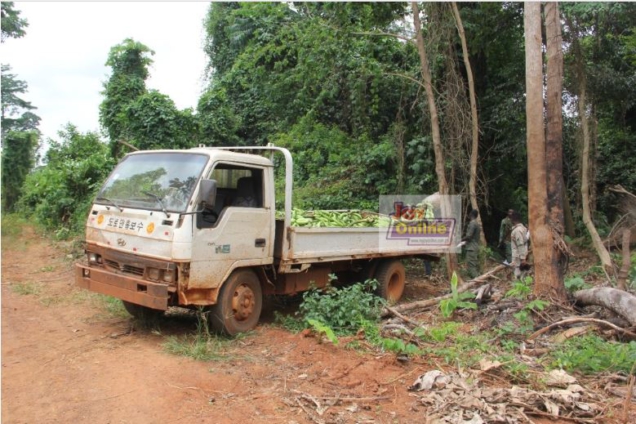 A scheme to allow farmers to grow crops in forests to increase their income and protect the reserves has led to an increase in illegal farming and deforestation.

Forestry officials at Juaboso in Western North Region have observed some farmers end up destroying trees in order to make room for the cultivation of crops like plantain and cocoyam.

District Forest Manager, Mark Aidoo says farmers failing to use the Taungya system have had their farms destroyed to make way for a tree restoration project.

Walking through the Krokosua hills forest reserve, Mark Aidoo counts the number of trees felled as a result of illegal farming activities. “When you look around you will realize that, felling of this particular tree has brought a whole lot of trees down,” he said.

While pointing at a big log, he says, many trees in the forest reserve have been lost as a result of the removal of one large tree.

After counting a number of plantains, he encounters tree stumps and trunks.

“These are some of the trees the farmers in order to establish their farmers, sometimes, they cut them into small pieces for firewood too.”

The forest is being gradually destroyed by the farmers and that is what disturbs Mr. Aidoo and his team.

When a forest is degraded, it can no longer function well. Its health declines until it can no longer support people and wildlife. It is estimated that, about 6.5 million square miles of forest are at high risk of degradation in the next 10 years.

“We haven’t measured to see the extent of destruction done to the forest but it can be more than one compartment,” he indicated.

Two hectares of forest that the forestry officials visited were formerly home to more than 2,000 different tree species but currently have less than 100 of them.

“If you look round the number of trees that [are] planted aren’t more than 100. It means they are destroying the land.”

The forestry unit works closely with three communities that make up the Krokrosua forest reserve in the Juaboso area.

According to Mr. Aidoo, the farmers take undue advantage of the Taungya system to clear the forest in order to engage in illegal crop production for commercial purposes.

The government of Ghana began a plantation development programme in the 1930s using the Taungya system, which was devised in Myanmar. Under this system, farmers are given parcels of degraded forest reserves to help establish and maintain timber trees as well as grow food crops.

In addition to alleviating the lack of farmlands in settlements near forest reserves, the goal was to quickly produce a mature crop of commercial timber.

Interplanted with certain tree species were food crops, particularly annuals like plantains, cocoyams, and vegetables. Farmers had a tendency to misuse the system over time and neglect tree crops.

“Most of the time, they [farmers] enter the forest and farm indiscriminately anywhere. Sometimes, we try to control them by destroying the farm, but they will still persist.”

The District Forestry Unit had to destroy plantain and cocoyam crops that had been planted in the middle of the forest.

The foodstuffs were gathered and donated to Juaboso Senior High School.

Mr. Aidoo says the exercise will be sustained in order to deter farmers from invading the forest to cut down trees for crop production.

He however indicates there are opportunities for farmers who abide by the forestry’s directives to produce their crops while also preserving the forest.

Western North Regional Manager of the Forest Services Division of the Forestry Commission, commended the action taken by the Juaboso district officials in protecting the forest reserve.

According to Stephen Asamoah, the Commission will go after the farmers if they continue to defy the established protocol.

DISCLAIMER: The Views, Comments, Opinions, Contributions and Statements made by Readers and Contributors on this platform do not necessarily represent the views or policy of Multimedia Group Limited.
Tags:
Farmers
Juaboso Forest District
Taungya system