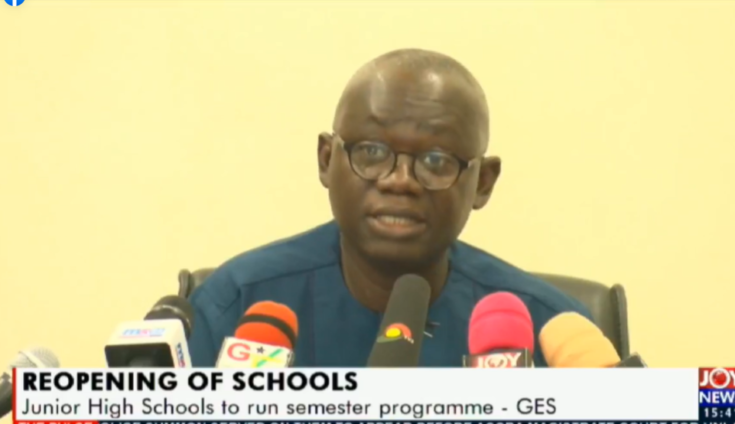 The Ghana Education Service (GES) has revealed Junior High Schools will run on a semester basis after schools reopen on January 15.

Speaking at a press conference, Director-General of the GES, Prof Kwasi Opoku-Amankwa said that this is to enable the schools to catch up with contact hours lost in 2020 as a result of the closures.

He revealed that form three students will begin their first semester from January 18 to June 11 and go on a break.

Prof Opoku-Amankwa added that GES is dedicated to ensuring the basic health protocols are observed.

He added that the Service will provide face masks, veronica buckets among others to ensure students are being hygienic.

This comes after President Akufo-Addo announced that all students from kindergarten to Junior High School will return to school on January 15.

According to him, government has drawn lessons from reopening of some sections of educational institutions in 2020, thus, it is in a better position to commence a new school year.

Professor Opoku-Amankwa said that because a semester will run for a longer period, there will be mid-semester breaks.

Meanwhile, students from kindergarten and primary will still run on the trimester system.

“School will start for Primary and KG from January 18 to April 16. They will then have April 17 to May 3 as their break period.”