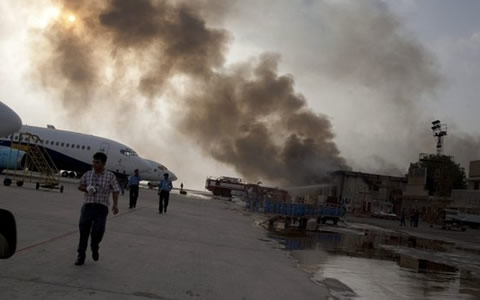 Pakistan's largest airport has resumed operations after an assault by militants which left at least 30 people, including the attackers, dead.

The assault on Jinnah international airport in Karachi began late on Sunday, with security forces gaining control in the early hours of Monday.

The Pakistani Taliban have said they carried out the raid as revenge for the killing of their leader last year.

A government spokesman said a full investigation was under way.

The Karachi airport attack comes against the backdrop of a major split in the Pakistani Taliban (TTP) – and threats of retaliation following limited military operations against foreign militants in North Waziristan.

Given the violence, it seems clear that any pretence at a peace process is now over. Few seriously thought that recent talks between the government and militants were getting anywhere anyway.

The attack is also a reminder, if it were needed, that despite their divisions, the Taliban retain the capability to mount spectacular strikes across Pakistan.

The attackers, wearing explosives belts, are believed to have entered the area using fake ID cards, although some reports suggest they cut through a barbed wire fence.

They threw grenades and fired at security guards in the old terminal, used for cargo and VIP operations.

The airport was shut down, passengers were evacuated and flights diverted as security forces fought back.

Seven militants were shot dead in a gun battle with security forces which lasted until dawn. Another three attackers detonated their explosives.

The dead terminal staff were said to be mostly security guards from the Airport Security Force (ASF) but also airline workers. The initial death toll of 28 was raised after the Civil Aviation Authority said two more bodies had been found inside the terminal.

Hours after the airport reopened on Monday evening, there were reports that a group of airport employees were stuck inside a cold storage facility where they had taken refuge.

Their relatives gathered outside the terminal building, demanding urgent action to rescue them. A spokesman for the Civil Aviation Authority said it was being investigated.

The Chief Minister of Sindh province, Qaim Ali Shah, said the attackers "were well trained" and their plan "very well thought out".

Later on Monday, security forces displayed a large quantity of weapons and ammunition seized from the attackers, as well as food, indicating they had been prepared for a lengthy siege. They also displayed the bodies of the dead militants.

Army officials said there were indications that some of the gunmen may have been foreign nationals.

The Taliban later said they had carried out the attack, and that its aim had been to hijack aircraft, though they failed to do so.

It was "a message to the Pakistan government that we are still alive to react over the killings of innocent people in bomb attacks on their villages", said spokesman Shahidullah Shahid.

Pakistan has been fighting an Islamist insurgency for more than a decade, with the Pakistani Taliban the main militant group.

Prime Minister Sharif recently told the BBC he was still hopeful a peace initiative with the Taliban could succeed, but the violence has continued, with Karachi a frequent target.