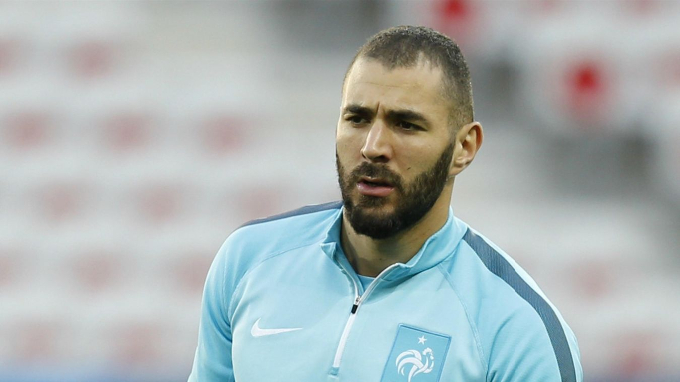 Karim Benzema has been charged over his alleged involvement in a sex tape blackmail plot against fellow France international Mathieu Valbuena.

The prosecutor said the Real Madrid star has been charged with "complicity in attempted blackmail and participation in a criminal association planning an offence punishable by at least five years imprisonment (in this case blackmail).”

Benzema, 27, is not allowed to have any contact with Lyon midfielder Valbuena after being charged.

Both men were previously expected to be named in France's squad for two upcoming friendly matches in the next few days, but coach Didier Deschamps now has an unexpected complication to handle.

Benzema was arrested on Wednesday morning in France and questioned over the scandal which also saw former France striker Djibril Cisse taken into custody last month.

Cisse was released after being questioned by police but Benzema was referred to the investigating judge in the Versailles courthouse after spending the night in custody.

News agency AFP says Benzema, who plays with Valbuena for the France national team, emerged from the headquarters of the judicial police at Versailles at around 9am CET on Thursday.

AFP are reporting that Benzema has recognised that he intervened in the blackmail affair and now the striker has been formally charged.

What is Benzema's alleged involvement?

A source close to the investigation divulged information to AFP. The source said:

" Karim Benzema has recognised that he intervened with Valbuena at the request of a childhood friend approached by three crooks who had a sex tape in their possession. He said that he agreed with a childhood friend about what he would say in order that his team-mate would negotiate exclusively with him. "

AFP also adds that Benzema said he wanted to help his friend without thinking that he was doing wrong by Valbuena. Benzema is thought to have discussed the matter with Valbuena in October when France met up for matches against Armenia and Denmark.

What does this mean for France?

Didier Deschamps is expected to soon announce his squad for friendlies against Germany and England on November 13 and 17 respectively. However, Benzema has been prohibited from meeting with the victim, his team-mate Valbuena.

The France squad is expected to gather at Clairefontaine on Monday.

So eight months before Euro 2016 takes place on French soil, it appears Les Bleus will be without their star striker for two important preparatory games.

As hosts, France did not play any qualifying matches so the two matches against Germany and England are key to their preparation.