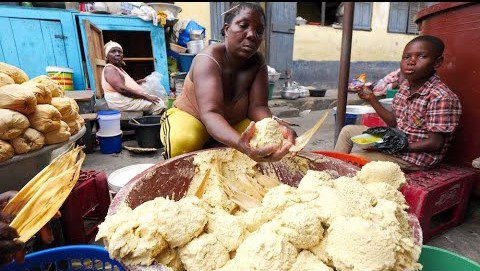 Lovers of local delicacies have constantly touted the superiority of their favourite meal. But in an era of shrinking balls of Kenkey, how many are willing to spend extra for more?

Kenkey is a staple dish prepared with corn dough in the country. It is a very popular dish and is usually served with pepper sauce and fried fish.

However, the price of its main ingredient, maize, is soaring. Some kenkey sellers in Accra say a bag of the crop, which sold at GH¢220 last year, is now selling at GH¢550.

This is affecting the purchasing power of consumers who are reeling from the sudden hike as vendors are forced to pass on the cost to them.

Market researchers Esoko has said its survey is showing an increase of more than 100%.

In a report by Joojo Cobbina, consumers and vendors in the kenkey food chain complained bitterly, especially about the sustainability of the business.

“We’re suffering because of the high cost of maize,” said Grace, a vendor.

Last year, she took a firm decision to shrink the size of her balls of kenkey to be able to make a profit.

Even that, according to Grace, does not cut it anymore as she has now increased the price of a ball to GH¢2.00

“I survey the market before setting a price. I used to sell my kenkey at GH¢1.50 but I made a loss so I decided to sell at GH¢2.00 per ball. Why should I do business and make constant losses?” she quizzed.

Another vendor in Bukom, Aunty Odotsoo maintained her kenkey price at GH¢1.00 because she believes her target market are not do not have the financial power to purchase at a higher rate.

She, however, offsets the cost by reducing the size of each ball.

The concerns of these vendors and consumers resonate with many others across the country.

According to him, this current situation is not unusual especially at this time of the year.

“This year the major rains started a bit slow. In the minor season, we have had an ideal weather pattern. Therefore, we expect that prices of supplies will be back to normal come November, December, January,” he told JoyNews.

DISCLAIMER: The Views, Comments, Opinions, Contributions and Statements made by Readers and Contributors on this platform do not necessarily represent the views or policy of Multimedia Group Limited.
Tags:
Agriculture Minister
Dr Owusu Afriyie Akoto
Kenkey
maize
prices