Kenya Election 2022: Why the count is taking so long 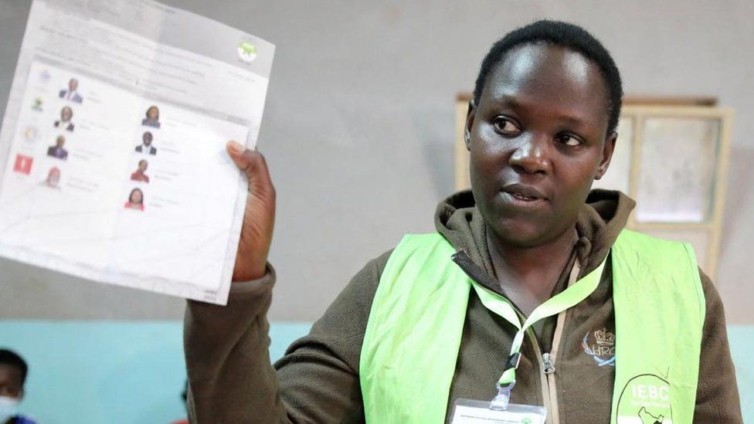 Votes were counted at each of the more than 46,000 polling stations and the results were then sent to the national tallying centre

Kenyans still do not know who their next president will be more than 45 hours after polls closed.

Election head, Wafula Chebukati has urged people to be patient and not to panic that media houses are releasing differing tallies.

Each organisation is making its own calculations based on the manual entry of data from more than 46,000 polling stations.

But it is only the electoral commission that can declare the winner.

The media’s tallies show that the two leading candidates – Raila Odinga and William Ruto – are neck and neck.

“There should be no panic about the differences we are seeing on the media screens. The results are from the same public portal; the approach [of each broadcaster] is different,” Mr Chebukati said.

He said at the end of the tallying the results should look “similar”.

Why is it taking so long?

When it comes to the electoral commission, on top of compiling the results, officials need to verify each one – another time-consuming task.

Officials are currently comparing the results the commission received in the form of a photograph from the polling stations with the actual results sheet, which is being hand-delivered to the tallying centre in the capital, Nairobi.

This is to ensure that both results match and a key reason why things are taking so long.

Counting in some polling stations was also delayed and travel to Nairobi, especially by agents from far-flung areas, could be further factors in slowing things down.

How are Kenyans feeling?

There is a sense of anxiety in the country as disputed elections in the past have led to violence or the whole process being cancelled.

In 2017, huge logistical errors led the Supreme Court to annul the result and order the presidential poll to be re-run. Officials are under pressure to get things right this time.

The country often grinds to a halt during elections, activities across the country have slowed and schools remain closed at least until next week on Monday. In Nairobi’s central business district, the usually busy streets are mostly deserted.

Allegations of election rigging are as old as the country. It was part of politics even before multiparty elections were re-introduced in the 1990s, but the push for free and fair elections has never faltered.

After the violence that followed the 2007 election, political parties and activists argued for the use of technology instead of physical registers, which could be easily manipulated, to verify voters.

This year’s election is the third time technology has been used but it has yet to deliver an election that has not been challenged in the courts.

Early reports, however, suggest that the electoral commission may have finally achieve this elusive goal with this election.

When will we know the result?

At the pace of the counting is ongoing, the local media is likely to finish tallying provisional results before the end of day on Thursday.

If there is a clear leader of the race, celebrations are likely to break out.

However, only the electoral commission can declare a winner after comparing and verifying the results.

The electoral commission has seven days after the election day to declare the result.

To win the presidential race in the first round, a candidate needs:

Otherwise voting goes to a second round which by law has to happen by 8 September.