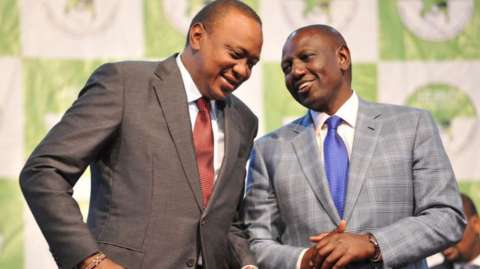 Kenya’s President Uhuru Kenyatta has reorganised his government and stripped his deputy of power-sharing privileges.

The revised executive order has raised sharp debate in Kenya – some say the changes are routine while others are convinced the Deputy President William Ruto is no longer viewed as a co-partner in running the country.

The presidency has changed its name to the executive office of the president. But some say it means President Kenyatta will no longer seek his deputy’s approval on important state affairs.

The deputy president may also lose direct funding to his office and power to appoint his staff. The head of public service has already alerted the finance ministry of the changes ahead of next week’s reading of the national budget.

Previously the pair – who first joined forces in 2012 as suspects at the International Criminal Court – consulted on key matters, including state appointments and government business in parliament.

But the deputy has lately been in the shadows as President Kenyatta reorganises the ruling party and influential positions in parliament and the senate, as he seeks to stamp his legacy before he leaves office at the end of his term in 2022.

Some analysts see these changes as President Kenyatta stamping his authority after voicing his frustrations with the deputy president’s supporters in government, who he has accused of undermining his agenda for the country.

Already the ruling party has dismissed legislators perceived to be close to the deputy president from key roles in the house committees, replacing them with the president’s loyalists.