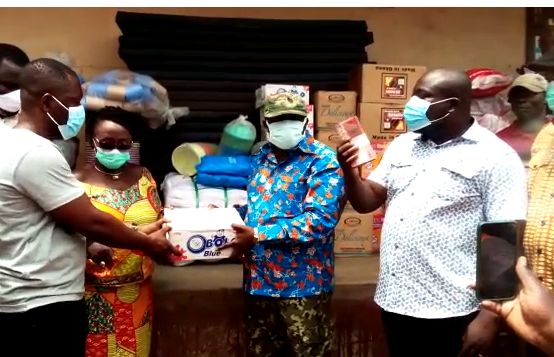 The Director General, Nana Agyemang Prempeh debunked news in circulation that government was not able to come to the aid of the people since the disaster occurred.

He said NADMO relief items are not the first point of call anytime disaster strikes, but rather a search and rescue mission is conducted first, then assessment by the relevant authorities, followed by the distribution of relief items.

Mr Agyemang Prempeh noted there is an urgent need for the extension of the sea defence project as a long term remedy to save the people from further problems associated with the tidal waves adding that the second phase of the project will start from the Aflao border.

“What I have seen now is not good enough, and I think there is the need to extend the sea defence wall project to help the people, “Mr Agyemang Prempeh said.

The NADMO Boss noted that the relief items were meant to solve the immediate problems for the residents whiles government solves the issues on the grounds as soon as possible.

Municipal Chief Executive Elliot Edem Agbenorwu noted that the assembly has done what it could in the interim, including the extension of water and other things to the areas as an immediate solution for the people.

He, however, appealed to the government to, as a matter of urgency, starts with phase two of the sea defence wall project to help the people have some peace of mind.

The MCE noted that the relief items by the NADMO, he believes is enough for the meantime adding that government was gracious to them when the project was stalled in 2016 which government quickly resumed work in 2017 and was completed.

He said government is not obvious of the need for the extension and the plight of the people.

“This is an appeal to government to come to the aid of the people and it should not be a political banter or a tug of war,” Edem said.

The MP for the area, Dzifa Abla Gomashie, was thankful to government for the swift response with the relief items and noted that the residents would love to be relocated in the long term and have the extension of the sea defence wall project done.

Dzifa Abla Gomashie noted that the people will continue to look forward to continuous support from the government as the sea ravages and destroyed properties and lives.

Hundreds of residents in the Ketu South coastal communities were displaced by the tidal waves, which have been a major problem for residents.

Several homes were submerged into the sea, with hundreds of cedis destroyed, while most residents are currently homeless.

The Director General was accompanied by the Volta Regional Director of NADMO, Divine R. K. Bosson, Pascal Agbagba from the regional office and the Municipal Director.

DISCLAIMER: The Views, Comments, Opinions, Contributions and Statements made by Readers and Contributors on this platform do not necessarily represent the views or policy of Multimedia Group Limited.
Tags:
Ketu South
National Disaster Management Organization (NADMO)
Tidal waves