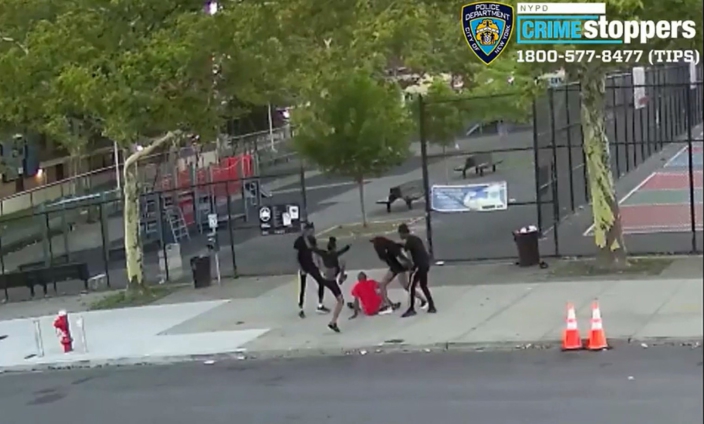 Scene of the moment where Gyimah Kutin was attacked

Ghana’s Consul-General in New York, Daniel Kingsley Atta Boafo, has welcomed the arrest of some suspects linked to the killing of a US-based Ghanaian taxi driver.

The New York Police Department arrested two of five suspects wanted for beating a taxi driver to death in Queens over the weekend.

They include Austin Amos, 20, who was previously announced as wanted in connection with the death of 52-year-old Kutin Gyimah.

The father of four, who hails from the Assin area in the Central Region of Ghana, is said to have died at the hospital due to attacks on him by the five assailants

He had demanded that they pay for his services at Rockaway in Queens.

The late Gyimah lived with his family in the Bronx and was working as a cab driver in Queens, Sunday morning, when a group of five passengers attacked him at approximately 6:30am near Beach 54 Street and Arverne Boulevard.

The assailants are said to have attempted to rob him.

Surveillance footage released by the New York Police Department shows Gyimah chasing the group on foot, then grabbing one of them who attempted to flee.

The members of the group are seen beating the driver. Mr. Gyimah was struck by one of them. He fell and in the process hit his head on the ground, rendering him motionless.

Consul-General of New York, Daniel Kingsley Atta Boafo, said the arrest of the suspects is welcoming news to the Ghana Mission in the US.

“It is great joy for the people of Ghana resident in the US and the Ghana Consulate of New York, the speed with which the US Police have been able to apprehend two of the perpetrators of the killing of the innocent Ghanaian taxi driver, Kutin Gyimah,” he said.

The other four suspects include three girls between the ages of 13 and 16, and a man of 20 years old.

The mission reiterated an earlier caution to Ghanaians resident in the United States to be mindful of their security.

“The mission will continue to advise all Ghanaians and other nationals to be security conscious in various dealings, to prevent such a barbaric incident in the near future,” said Mr. Atta Boafo.

“We will be monitoring and providing updates as the issues on the investigations keep unfolding,” he promised.

DISCLAIMER: The Views, Comments, Opinions, Contributions and Statements made by Readers and Contributors on this platform do not necessarily represent the views or policy of Multimedia Group Limited.
Tags:
Consul General of Ghana’s Consulate in New York
The Ghana Mission in the US
US-based Ghanaian taxi driver