It said the leader's heart had swelled when he saw the North Korean audience respond enthusiastically to the performances of famous K-pop groups.

He said the musical exchange was a significant occasion giving the appearance of a united country.

The concert came amid improving relations between the Koreas.

The North sent performers to the Pyeongchang Winter Olympics in South Korea earlier this year, and the leaders of the two countries are due to hold a summit on the border later this month.

The performers are in Pyongyang for two shows, the first South Korean musical delegation to visit in more than a decade.

The delegation, which combines K-pop, rock and other genres, is set to perform again on Tuesday. 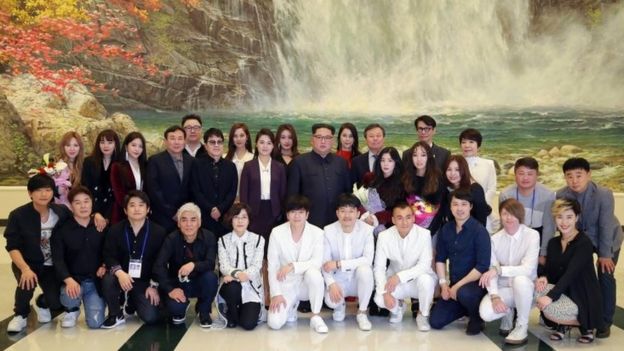 Mr Kim is the first North Korean leader to attend a performance by an artistic group from the South, said South Korea's official news agency, Yonhap.

His sister Kim Yo-jong and the country's nominal head of state Kim Yong-nam are also said to have attended.

Kim Jong-un "showed much interest during the show and asked questions about the songs and lyrics", the South's Culture Minister Do Jong-hwan told journalists.

Meanwhile, one of North Korea's top officials, Kim Yong-chol, has apologised to South Korean reporters who had hoped to cover the performance after all but one were barred from entering the Grand Theatre, South Korean Yonhap news agency reports.

Mr Kim, who is in charge of affairs with South Korea and head of the North's national intelligence organisation, said that he thought that "there might have not been sufficient co-operation between the chairman's security guards and concert organisers" at the event.

"It was wrong to hinder the free media coverage and filming," he said, in what Yonhap reported as "a rare apology".

Mr Kim offered an apology on behalf of North Korean authorities, saying that the restriction was "not intentional", Yonhap reported.

The third inter-Korean summit – there were also meetings in 2000 and 2007 – is due to be held on 27 April. No date has been set for the US-North Korean summit.

Meanwhile, the US and South Korea have begun their annual military drills, which have been scaled down compared with previous years as both countries prepare for talks with North Korea.

Although nearly 300,000 South Korean troops and 24,000 American troops will take part, the drill will be a month shorter than usual and will not involve nuclear submarines.

In the past, the drills have infuriated North Korea but correspondents say that this time Pyongyang is keeping relatively quiet. Mr Kim reportedly told visiting South Korean officials that he understood that the exercises had to go ahead.