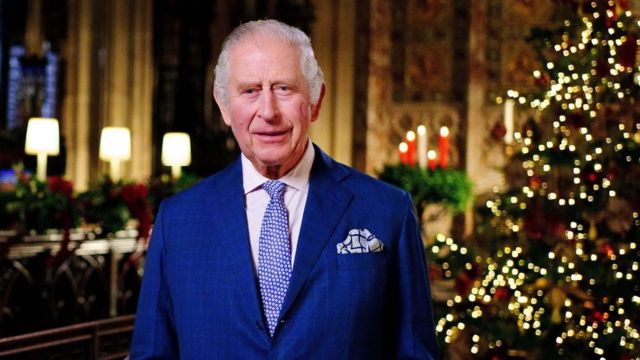 King Charles has used his first Christmas message to reflect on the cost-of-living crisis.

He spoke of the “great anxiety and hardship” for those struggling to “pay their bills and keep their families fed and warm”.

There were images of food banks and help for the homeless alongside the speech, recorded by the King in St George’s Chapel, Windsor.

He paid tribute to his mother Queen Elizabeth, who is buried in the chapel.

The late Queen pioneered the televised royal Christmas Day address, and used what was to become her final message last year to speak of “passing the baton” to the next generation.

The themes of the King’s speech touched on some of his causes and beliefs – concern for the disadvantaged, the importance of public service and supporting a multi-faith approach to religion.

Only “working royals” appeared on screen in the King’s broadcast, including the Queen Consort, the Prince and Princess of Wales, the Earl of Wessex and the Princess Royal.

That meant that Prince Harry and Meghan, the Duke and Duchess of Sussex, were not mentioned. The Duke of York was also not included.

At a time of industrial strife and financial pressures, the King’s message focused on those supporting people in need.

“I particularly want to pay tribute to all those wonderfully kind people who so generously give food or donations, or that most precious commodity of all, their time, to support those around them in greatest need,” said the King.

The message was accompanied by pictures of charities giving food to the homeless and volunteers helping at a food bank.

Buckingham Palace has said funds donated after the death of the late Queen were being given to a charity helping those unable to pay energy bills.

The King has gathered with other senior royals at Sandringham, Norfolk, for Christmas, and earlier attended the traditional Christmas Day service for the first time as monarch.

The King praised the emergency services who “worked tirelessly to keep us all safe”, teachers and health and social care staff.

Last year proved to be the late Queen’s last Christmas message, and the King remembered the “love and sympathy” that followed her death in September.

“Christmas is a particularly poignant time for all of us who have lost loved ones. We feel their absence at every familiar turn of the season and remember them in each cherished tradition,” said the King.

Standing “close to where my beloved mother, the late Queen is laid to rest with my dear father”, he spoke of his mother’s faith in God and also her “faith in people”.

The message highlighted the community work of faith groups, and the King, as well as asserting his own Christian belief, extended this to other religions.

He spoke of the “heartfelt solidarity” shown by “churches, synagogues, mosques and gurdwaras”.

The King described how moved he had been to go to the birthplace of Christ in Bethlehem: “It meant more to me than I can possibly express to stand on that spot.”

The King’s speech continues a tradition going back 90 years, with the first royal Christmas broadcast delivered on the radio in 1932 by George V. The first televised broadcast was presented by Elizabeth II in 1957.

In terms of changes in style, the King delivered his first message standing up, rather than a formal address from behind a desk, and his themes addressed more current social issues.

But there was much that was traditional. This was a Christmas Day message delivered in a chapel with a choir singing, touching on themes of faith, hope and the importance of serving others.

The choir finished, as it had last year for the Queen’s last message, singing the carol O Little Town of Bethlehem, with the King highlighting its message of “light overcoming darkness”.

DISCLAIMER: The Views, Comments, Opinions, Contributions and Statements made by Readers and Contributors on this platform do not necessarily represent the views or policy of Multimedia Group Limited.
Tags:
Christmas Message
King Charles III
UK