Know these facts about land acquisition: what you missed on Joy FM’s Super Morning Show 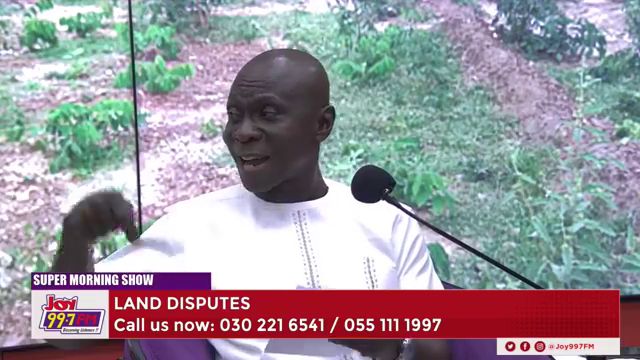 Joy FM’s Super Morning Show had the second edition of land issues of litigation surrounding land acquisition in the country.

According to Mr Gyan, if you acquired land prior to the dispute of its original owners, you will not lose the land even when the person you bought the property from loses.

“If you are not a party to the litigation and you acquired your land prior to the commencement of the litigation the fact that your vendor [the person that gave you the land] lost in litigation does not mean you will lose your land. The law only requires you to be prepared to atone tenancy to the new owners [the one who won in the court case].

“So once you are prepared to recognize the new winners of the court as your landlord, you don’t lose your land.

But when you are actively involved in the court case by providing evidence against the party that lost, it is inadvisable. Just stay in the middle since you bought your land before litigation and be prepared to accept whoever wins as your landlord.”

Pay attention to the renewal clause when buying land so that your descendants are not thrown out when your lease tenure expires, Mr Gyan advised.

According to him, prior to the new Land Act, when a land lease expires every project undertaken on the property automatically goes back to the original land owner.

However, that has been reviewed to bring about fairness to buyers.

“The expiration mostly occurs when the original contractors and parties have died. It is their descendants who will be in occupation so in the new Land Act, if you are an indigene of a place and you get land, at the expiration of the term, the new law says the lease shall automatically be renewed for the same number of years.

“Now if you are not an indigene the law says unless the lease says it shall not be renewed, there should be an implied term in the lease that it shall be renewed for the same number of years as it was. So the legal regime has set out the modalities for the renewal of leases so those who are taking leases would not worry about what will happen at expiration,” he explained.

Here, Mr Gyan said somebody else can claim your land if he or she stays on your land without your permission for 12 years.

“If somebody comes on your land without your permission and stays in possession of your land for 12 years and you know the person is there and you do nothing at the end of year 12 your title is extinguished and that person becomes the new owner.”

However, he clarified that caretakers are excluded from this law.

“If I make you a caretaker of my property, an uncompleted building for 15 years you don’t become the owner because your possession is not adverse. I put you in possession.

Mr Gyan said it is illegal to conceal very critical material information in a land transaction.

“You have some information that you should have brought to the attention of the prospective purchaser you conceal it it’s a crime. In fact, the person who does that opens himself up to two possibilities. There is a civil and criminal liability parts.”

Touching on this, the lawyer advised against the use of land guards to win land ownership.

“Land guards were made by land owners which is why it is very difficult for the political establishment to deal with the issue. Land guards came up because of contestations of ownership. Group A and Group B are contesting ownership, so Group A brings some people to chase out Group B.

DISCLAIMER: The Views, Comments, Opinions, Contributions and Statements made by Readers and Contributors on this platform do not necessarily represent the views or policy of Multimedia Group Limited.
Tags:
Land acquisition
Super Morning Show