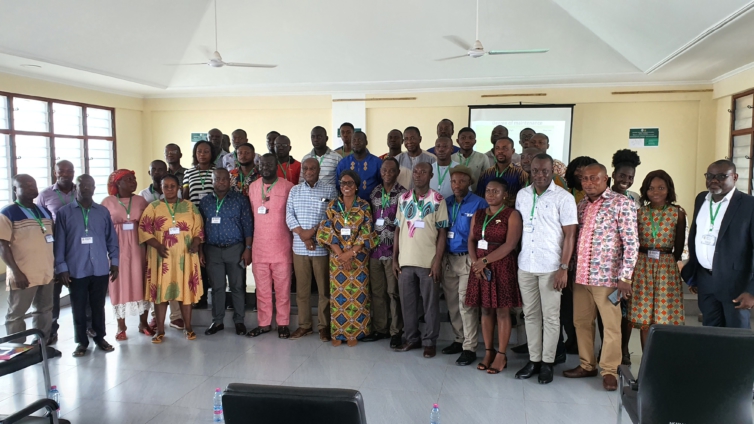 The meeting, which is a collaboration with the Network of Excellence in Land Governance in Africa (NELGA), was used to inform the participants on various ways to mitigate flood disasters in their communities.

The NELGA flood land research, funded by the GIZ ,sought to determine the category of people who acquire lands in flood-prone areas, establish reasons for people acquiring and living on flood-risk lands.

It was also meant to recommend and develop adaptation and mitigation for communities in flood-prone areas and to ascertain the level of awareness of people to risk associated with flood-risk lands.

The research was based on seven communities with high flood risk.

As part of its flood research activities, the team organised a one-day workshop at the Asokwa Municipal Assembly to share the findings of its current research on the demographic and socio-economic profile of persons living in flood-prone areas and their coping and adaptation practices.

The provost for the College of Art and Built Environment Prof. John Bugri noted that resources can be put to prudent use if individuals improve their behaviour to prevent floods.

He also advised residents in flood-prone areas against overreliance on government interventions.

“If we as human beings, we are able to change the way we do some of the things we do to obstruct the free flow of water by building on water ways and the likes, those are activities of indiscipline.

“We will be doing ourselves a lot of good by preventing flooding and redirecting and redeploying scarce resources.

“If you are faced with a problem such as flooding and the government is unable to come to your rescue and you are also sitting there watching the situation escalate, you are risking your own life,” he added.

The head of Centre for Settlement Studies, Prof. Divine Ahadzie, was worried about the toll of flood on the economy.

“In the same way flooding leads to three percent loss in performances, so, will it be if you you allow floods to occur frequently in the Asokwa municipality. Every year that major floods occur we are losing performance of the economy by three percent,” he said.

He also called on the government to equip assembly men so that they can help the community.

“Unfortunately, since the research two years ago, we have still not seen that drive for community action led by the assembly man. For the reason that they don’t have resources to do that.

“And so, I think moving forward, that is an area we should critically look at- how we are going to resource assembly men to be able to lead the community. And this is the area that I think the government should pay attention to” he said.

The Municipal Chief Executive of Asokwa, Akwannuasa Gyimah was grateful to the KNUST team for sharing their findings.