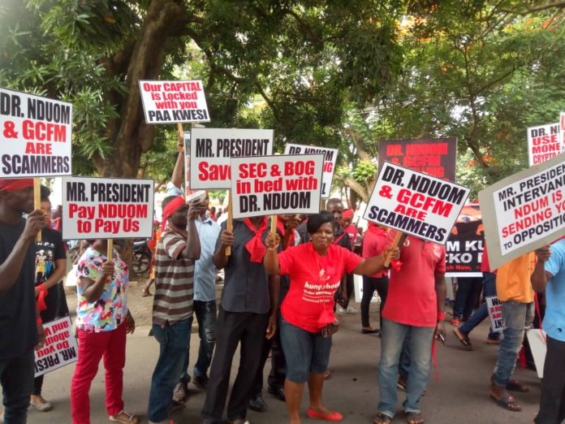 Following the clean-up exercise in the banking sector by the Central Bank of Ghana in accordance with section 123 to 137 of Act 930 of the Banks and Specialized Deposit-Taking Institutions Act 2016 which started in August 2017 and ended in August 2019 with a comprehensive statement issued indicating the banks, microfinance and non-banking financial institutions affected and the reasons for revocation of their licenses, the Securities and Exchange Commission(SEC) also embarked on a clean- up of the financial investment sector under the Securities Industry Act,2016 (Act 929) and revoked the licenses of 53 fund management companies on the 31st of  November 2019 due to their inability to pay the funds of investors amounting 8 billion cedis and their non-adherence to the financial regulatory rules.

Since then, the Black shield Capital Management Limited Formerly Gold Coast Fund Management Limited and 3 others have made an attempt to challenge the decision in the law court seeking for the reversal of the revocation of their licenses.

According to the Director General of Securities and Exchange Commission (SEC), Reverend Daniel Ogbarmey Tetteh, this legal action has made it difficult to continue with the liquidation process and will not permit the Gold-Coast Fund Management (GCFM) customers to be included in the government decision to bail out the fund management companies whose assets were liquidated under the authority of the Registrar General, Mrs. Jemima Oware who was the Official Liquidator.

There were other news reports that indicated that the Securities and Exchange Commission said they were granted access to the data of clients of GCFM with the help of the law enforcing agencies but is still not clear as to whether the claims of the clients have been included to the bail out or not. There has not been any official information on that.

This arising situation is making it uncomfortable for the customers; it is unclear to them as to when the legal process will end and has become more difficult for them to understand and cope with every passing moment of waiting without answers. This has resulted in so much anxiety and several deaths of customers.

The pursuit of legal redress came to a halt when the court went on a legal vacation since July, 2020 and was reported to be resuming in October,2020. Clients continue to be in anxiety as the month of November is also gradually ending with no information on the issue and have made painful pronouncements regarding their decisions on voting during the general elections.

They said just as the elders say” we cannot drum with an empty stomach” meaning they cannot vote when they are hungry. They will not be part of an exercise that they feel will only be in favour of few politicians who will not be ready to speak for the poor citizens especially in situation like this and will make sure they advise all their family members not to do so. This will definitely have a huge impact on the general elections with over 30,000 customers and their families in the entire country.

Some of the aggrieved customers interviewed expressed their displeasure and said that what makes it more painful is the fact that they are not updated on what is going on but rather continue to remain in limbo and suspense which is the main cause of deaths and mental problems among customers. They are not hearing from neither the Securities and Commission (SEC) nor the government even as the country approaches its general elections. Majority of the customers have begun to think that what is happening is a ploy by the government and the Security and Exchange Commission to deny them their money. They believe the delay is to buy time until the elections are over.

The lives of the customers have become miserable which is worsening with the emergence and effect of the COVID-19 Pandemic and are therefore demanding answers from the government, the Security and Exchange Commission and the owner of Gold Coast Fund Management Limited, Dr. Paa Kwesi Nduom to end the sufferings of the poor customers.

However, leaders of the coalition of aggrieved customers of GCFM are ready for serious negotiations and payment plans. They are calling on government, the Security and Exchange Commission and all relevant stakeholders to expedite the process to end the sufferings of the poor customers and also wish to call on the National Peace Council to help in the resolution of this situation as soon as possible.

DISCLAIMER: The Views, Comments, Opinions, Contributions and Statements made by Readers and Contributors on this platform do not necessarily represent the views or policy of Multimedia Group Limited.
Tags:
Gold Coast Fund Mgt
Security and Exchanges Commission