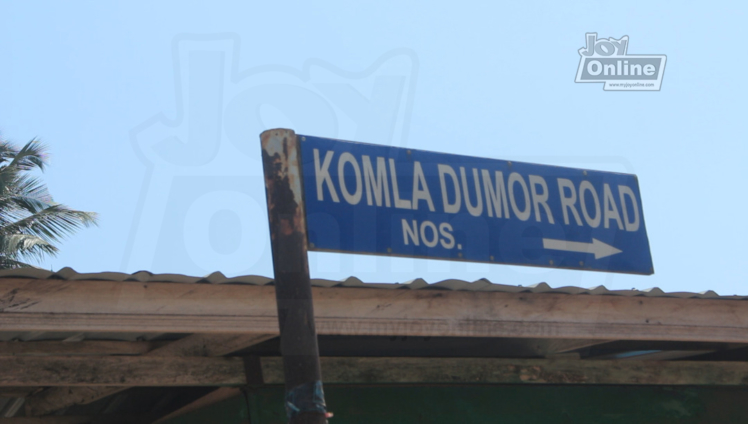 There have been increasing number of deplorable roads in the Volta Region making residents lament about the current state of affairs.

The President declared 2020-2022 as years of road, but some major districts in the Volta Region are yet to get their fair share of the roads promised by the President, a situation which has been a source of worry to residents in the Ketu South Municipality.

The deplorable nature of the Komla Dumor road which is a major stretch leading to the  Torgbui Fiti Palace and other communities as well as Togo, has been a worry to the residents who want government to fix it as early as possible to improve the economic activities of the area.

The Komla Dumor road, which was named after the late BBC Journalist has been left very deplorable for several years, making residents wonder if they are also part of the country. They contend that no plan seem to be in the pipeline for the repair of their roads.

The road close to the one named after Komla Dumor is the Diamond Cement road. It has one of the biggest companies in the Volta Region operating in the area, yet has been left so bad and dusty making life difficult for residents in that area.

Residents have over the years demonstrated against the nature of the roads to draw the attention of the President, however nothing seems to have been done about their plight.

They said improved transportation due to good roads, apart from ensuring easy flow of goods and services, will provide easy access to the neighboring Togo.

However, years of delay have renewed doubts of the residents over government’s commitment to completing the sections of the roads within the Volta Region.

The residents complain that, billowing dust poses health hazards and the roads become slippery and muddy when the rains set in. This makes it very difficult for people and vehicles to ply the roads, thus increasing travel time and the attendant economic cost.

“The Komla Dumor and Diamond Cement roads have become so bad that it is affecting us negatively especially economic activities of the town and the dust is also another major problem, especially for those of us living in these areas“, a resident complained.

The current nature of the roads is worse than it used to be in the past and if nothing is done about it urgently, economic activities would get worse and government may lose a lot of revenue as a result.

Residents hope that these two roads, namely; the Komla Dumor road which is 7 kilometers through the Community Day SHS to Anoenu Ghana Togo boundary and 7.3 kilometer-Diamond Cement road from Aflao Police Station through to Akporkploe Ghana-Togo boundary, will receive a face-lift as early as possible, especially because there is a big company that pays tax to the government.

Municipal Chief Executive for Ketu South, Mr. Maxwell Lugudor noted that the above mentioned roads are bad and need government’s urgent attention to give relief to the residents in the area.

Mr. Lugudor, however gave the assurance that government is poised to fix the bad roads nationwide and Ketu South roads will not be left out.

The MCE noted that some roads in Ketu South like the Klikor town roads, the swanzy beach road in Denu, the Municipal Assembly roads and the VIP station roads in Aflao among others are currently under construction.

He however appealed to the President, while thanking him for the roads under construction, to help fix the Komla Dumor and Diamond Cement roads.

Mr. Lugudor described President Akuffo-Addo as a listening father who will listen to the plight of his people and make sure that the above-mentioned deplorable roads are fixed soon.

“It is true the Komla Dumor and Diamond Cement roads are very bad and we are appealing to our listening father the President to fix the roads as he has already started on other roads in the municipality” Mr. Lugudor said.